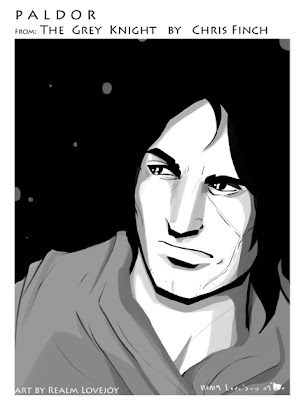 Hello, everyone! Today I am featuring an interview with author Chris Finch, who is represented by Colleen Lindsay of FinePrint Literary Management. (Lucky author, huh?) His dark fantasy novel THE GREY KNIGHT is currently on submission. I wouldn't be surprised if it sold soon!
The artwork featured in this interview is a drawing of Paldor (also known as Warlord), a character from THE GREY KNIGHT. Chris gave me such vivid descriptions of Paldor, I had a picture of him in my mind straight away. It was a real pleasure interviewing Chris and having the opportunity to illustrate a complex character like Paldor. I think you will all enjoy reading his in-depth answers!
1) What is THE GREY KNIGHT about?
Courage.
Oh, sure, it's about a lot more than that -- it's about love and passion and loss and betrayal, it's about the power of the human spirit and the frailty of the human condition, and it's about how good and evil can be such wriggly concepts, but ultimately all those things lead to courage.  That's one of the reasons it's presented in such a dark setting.  The world the book is set in is in its twilight:  the great empires have fallen, authority and justice have been corrupted, and while some dimmed splendors still remain, the fear of their caretakers corrodes their beauty steadily and surely.  With this kind of a backdrop, it's much easier to see even the tiniest acts of courage in stark contrast to their setting.

So while it's about changelings and murders, dark gods and their immortal champions, governments corrupted, cities aflame and love entwined with loss, ultimately, it's about courage.

2) What inspired you to write THE GREY KNIGHT?
Primarily, the world that the story takes place in has been knocking around in my head for as long as I've had a head to knock things around in.  Writing the stories that happen there is part compulsion, part obsession -- and then there's the psychotic little voice that likes to shout at me from the dusty corners of my mind, reminding me that if I don't tell these stories, nobody will ever hear them but me.  I don't know why that's important, but it is for me, and that's what's always hiding at the core of my motivations for writing about that place.

This particular story started a long, long time ago with its roots in my disappointment with genre convention, though I wouldn't have known to call it that at the time.  As a kid it bugged the heck out of me that the good guys always seemed to win and everyone lived at the end (though I always gave Lord of the Rings a pass on that, because even though almost everyone lived to the end, the end itself was incredibly sad and utterly appropriate).  Anyway, the deviances from that model excited me: Corwin of Amber, Elric of Melniboné, and even Covenant of the Land to a degree (though it constantly irritated me how thoroughly he managed to screw things up) were still basically good guys... kind of... well I rooted for them anyway, right?  And the prices they paid to move ahead were always heart-wrenching, terrible and life-changing.

But even so I realized I was always cheering one side and booing the other, even if it became clear that the team I was rooting for wasn't very sportsmanlike.  I wanted to hear a story where I rooted for everyone, where I loved everyone dearly, where all the opposing points of view made sense to me, the impartial observer -- and where I pounded the table in rage and tears when the characters I loved inevitably wound up trying to kill each other because there was no way they'd ever see eye to eye.

I couldn't find one of those at the time, so I wrote it instead.

3) What's it like working with Colleen Lindsay? (I'm sure many authors would love to know.)
Colleen's brilliant.  She's energetic, she's funny as hell, she's got great experience to draw from across the board, and she strongly believes in my work -- I honestly don't know what else you could ask for in an agent, aside from possibly a magic pen she could give to publishers that would make them want to write up contracts with large cash advances.

She's an excellent business partner and an incredibly smart reader, and I can say without question that although the story and its structure are thoroughly mine, the manuscript is far, far better for her having participated in its growth.  She's helped me go through changes I didn't have any way to know I needed to go through, and coming out the other end I've said "Man, did I need to do that!"  Great stuff.

4) Did you encounter any challenges transitioning from THE GREY KNIGHT to book two?

I'm not sure I'd call them challenges, exactly.  When I build a book, I first write out the outline, start to finish, so I have some kind of idea where I'm heading.  After that, I write scenes as they appear to me -- definitely not in linear order, and the most vivid ones first. Then finally I slot those scenes into the structure and connect the dots to discover all the cool scenes in between I didn't know were there. There are a lot of what I think are great scenes in the second book, so I'm still putting together all of that scene work, and it's been going very smoothly so far.  Sure, I've had a couple of surprise characters show up and insert themselves into the story, and once or twice someone dies a bit earlier or later than I expected, but it's been nothing a little nudge to the story structure here or there can't straighten out.

Probably the most jarring shift was moving out of my editing mind and back into my creation mind, and that wasn't a challenge -- it was the best rush I've had all year.

5) What's your advise to writers who are currently on submission?
I think the only advice that makes sense is to write.  Don't let dust collect on your keyboard, don't let your ideas slip away, don't let your fingers forget what it's like to hold a pen.  It's not just about honing your skill or constantly improving, though those are great reasons to keep it up.  It's about an artist producing art, and there's never enough of that.
Thank you, Chris, for sharing your wisdom and telling us about THE GREY KNIGHT!
(He is so poetic, I just loved all his answers, didn't you? Plus, he's a really nice guy.)
I wish you great success, Chris!
--Realm
__________________________
Enjoyed this interview? If you're an author, editor, agent, or illustrator and would like a five question interview and a drawing of your character (or of yourself), email me at rtlovejoy (at) yahoo (dot) com.
Labels: author interview