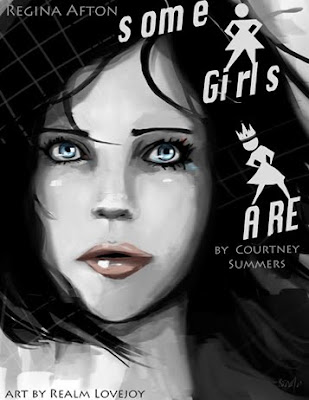 I'm very excited! Today we have YA author Courtney Summers sharing her wisdom and information about her upcoming novel, SOME GIRLS ARE (St Martin's Press). Courtney is represented by Amy Tipton (FinePrint Literary Management).
The illustration featured here is a painting of Regina Hafton, the main character of SOME GIRLS ARE. She's an eighteen-year-old former mean girl, a fallen popularity queen. When I read the description of SOME GIRLS ARE, I was inspired to paint an emotive portrait of fear--a girl expecting the worst. I could totally feel what someone in her position would go through.
1) What is SOME GIRLS ARE about?
Some Girls Are, which comes out in January 2010, is about a mean girl named Regina who falls from the top of the social ladder after a terrible misunderstanding involving her best friend's boyfriend.  Her pure evil ex-friends are dead set on revenge and punish Regina in brutal ways, physically and mentally.  Out of sheer desperation, Regina takes solace in the companionship of Michael Hayden, a misfit she herself used to bully.  But as a bond begins to form between them, they BOTH become the targets of her former clique.  All bets are off.  High school becomes a total game of survival.  No guarantees.

2) What inspired you to write the story?
I am super-fascinated by girl-bullying.  I think just about every girl has a story about being bullied by girls or bullying other girls themselves.  What's scary about a lot of these stories is that the people involved are often friends with each other.  In fact, my worst experiences with being bulled always happened at the hands of the girls I thought were my best friends and believed were my best friends in spite of what they did to me.  I will forever question why girls do these things to each other and writing Some Girls Are was about asking those questions.
3) Which character in SOME GIRLS ARE do you relate to the most and why?
Oh, jeez.  I'm not sure I want to cop to relating to any of them because they do such awful, awful things to each other!  :)  But in truth, I relate to them all on some level.  With Regina, I certainly have related to her fear of being outcast in a school environment and having that fear overshadow everything and having that fear force you to act  in less than stellar ways.  High school can be such a desperate and intense environment.  Sometimes it feels like it's entirely about self-preservation.
4) What's your advice for writing with an effective YA voice?
Don't pander or condescend.  Teen readers know when you're doing it.  I think a lot of writers knot themselves up worrying about what they can/cannot put into YA fiction--odds are good your novel will start to unravel the moment you start overthinking it like that, so go where the story wants you to go.  Just be true to what you're writing.  Be honest and don't hold back.

5) What did you learn from getting published?
How to let go!  Once your work is out there, it is truly out of your hands.  That can be very intimidating, but over time you learn that it is absolutely okay.  It's a good thing.  Om.
Thank you so much for all the fantastic advice, Courtney! And SOME GIRLS ARE sounds like an absolute must-read. I am there as soon as it comes out in January 2010. I'll post a reminder on The Blog when the day is near!
--Realm
_____
Enjoyed this interview? If you're an author, editor, agent, or illustrator and would like a five question interview and a drawing of your character (or of yourself), email me at rtlovejoy (at) yahoo (dot) com.
Labels: author interview