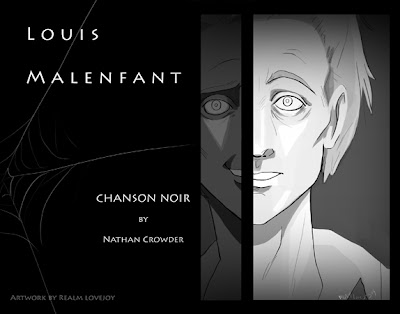 Today's interview is with author Nathan Crowder! Nathan has an array of experiences from comics to scripts to short stories and a ton of novels. He's not one to shy from live reading, either. Nathan is currently seeking representation. (Some lucky agent is bound to snatch him up soon!)
The illustration featured here is a drawing of Nathan's CHANSON NOIR character, Louis Malenfant. Nathan described Louis as being a middle-aged, victim-prone, and creepy man--a key to a dark puzzle. I was pretty psyched when I read the description. Sounds exactly like the kinda thing I like to draw!
1) What is CHANSON NOIR about?
Chanson Noir is about a group of super-humans learning to work together to stop the avatar of physical decay -- the Queen of the Black Sigh -- from breaking free from her interdimensional prison.  If she breaches the barriers keeping her in her dimension, the queen's hideous insect armies will swarm across thousands of parallel worlds, destroying everything they touch.  But with the heroes of the Protectorate lost, far from home, it may be all they can do survive, let alone stop this being with God-like powers.

2) When you're writing dialogue, what do you focus on?
Dialogue has always been one of my strong points.  I spend a lot of time really listening to conversations that go on around me.  People rarely come out and say what they want to say.  They hem and haw, they go off on tangents that don't really move the story forward, but instead say something about who is talking.  That makes capturing the organic feel of a dialogue my primary focus.

3) What did you learn from working on comic books?
The two biggest things I picked up were how to pace action sequences, and how to juggle multiple sub-plots and large casts.  Comics have 22 pages and only so many panels per page.  Learning how to make everything fit without ignoring characters and still ending on the right note was a challenge, but one that made my writing better.

4) What's the most challenging thing about writing short fiction?
Ultimately, keeping it short.  There's a lot of room to wander in a novel.  Short stories generally need to be kept under 5,000 words or so.  That doesn't leave a lot of time to build a compelling character and complex story, so economy is key.

5) Do you have advice on live reading and becoming better at it?
Practice, practice, practice.  Reading your work out loud helps find sentences that are too long and all kinds of rough patches.  It also helps establish if the dialogue sounds "real" or stilted.  So even if you aren't doing live readings in front of audiences, it's a good tool.  Once you're comfortable reading your work alone, read it to a few friends.  Get used to looking up from the page and connecting with your listeners, if at all possible.  You don't have to do voices or make sound effects.  But having some kind of emotional investment in the story and characters is always helpful.
Wow--thanks for all the advice, Nathan! CHANSON NOIR sounds exciting! (And I'm already a Louis-fan.)
Cheers,
--Realm
_________
Enjoyed this interview? If you're an author, editor, agent, or illustrator and would like a five question interview and a drawing of your character (or of yourself), email me at rtlovejoy (at) yahoo (dot) com.
Labels: author interview