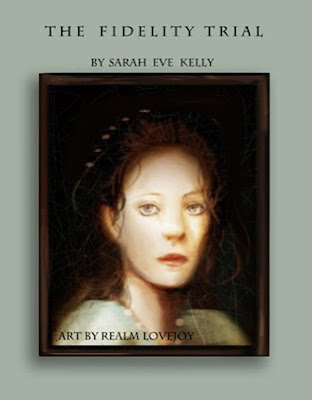 Today we have something different--a historical fiction writer! Sarah Eve Kelly is an author represented by Jenny Bent from The Bent Agency. (Jenny was previously with Trident.) Sarah is a second-year PHD candidate at the University of Cambridge, studying early modern history. Her Tudor-set historical novel THE FIDELITY TRIAL is about Anne Boleyn and is currently on submission.
Sarah asked me if I could do a historical illustration...I said yes! The illustration here is a portrait of Isabel Ascham, a seventeen-year-old maid of honor. The story is told mostly from her point of view. This painting took no longer than the other drawings I've done for authors. To get the old portrait look, I layered a lot of shadows and soft feathery strokes--it's a fast process, unlike the olden days.
1) What is THE FIDELITY TRIAL about?

The Fidelity Trial is a triptych tale of the events that led to the destruction of Queen Anne Boleyn throughout the winter and spring of 1536. Isabel, in awe of the Queen and in love with the Queen's brother, is unwittingly conscripted into acting as a force in the Queen's destruction. Thomas Cromwell, secretary to Anne's husband, Henry VIII, must choose between his love for Anne and his own ambition. When a miscarriage, an ill-judged sermon, and a failed treaty lead Anne and Thomas from friendship to public enmity, one of them must fall, and Anne must reap the rewards – and the punishments – of being one of the most quick-witted and politically active consorts in English history.

2) What inspired you to write about Anne Boleyn?

I think everyone who knows Anne Boleyn's story falls a little in love with her - that's definitely what happened to me. It's a story that never gets old - and that's why it's been told so many times! I think what's new about The Fidelity Trial is that it explores those last, crucial months of her life, and this story has it all: love, conspiracy, murder, redemption. It was a joy to be able to recreate her, and the people around her, in the way I see and understand them, and I think The Fidelity Trial will resonate with a lot of readers, even the ones who think they know everything there is to know about Anne. She's a constant surprise.

3) For a historical novel, you must have done a lot of research. How do you go about researching for your novel?
I always feel that historical novelists have a bit of a cheat, because we're recreating ruins -  there's always a template we can turn to if we get stuck. In that way I'm really very grateful for the research; it's a wonderful part of the process! I started the novel with what I knew - I'm a history geek, so that amounted to quite a bit. But the process of researching lasted throughout the first, second, and third drafts; it's not as though I do the research and then do the writing. I was constantly looking things up and learning - a remarkable byproduct of writing this (or any) kind of fiction.
4) What's your writing process like? Do you use an outline?
Thanks to The Fidelity Trial, I learned to use some kind of outline. This novel actually began in the middle, and I fleshed out the end and the beginning from there. I tended to write in spurts before I really learned the discipline of sitting down to it every day; this made things a lot harder on me than they had to be! I knew the history involved in The Fidelity Trial so well that it never occurred to me to do an outline - I just wrote it until it was done (and then wrote it again, and again...). I suppose I used The Fidelity Trial, in a way, to hone what my process actually is. The experience was worth its weight in gold for that.
5) How do you like working with Jenny Bent?
Publishing is the most complicated world I've ever tried to immerse myself in - more complicated than graduate school! - and Jenny has been absolutely amazing. She knows everything there is to know; her track record is unbeatable; and she's taught me so much about the business and about the process. It was Jenny who helped me to make The Fidelity Trial the best it could be, a process which - understandably - not a lot of agents would make the time or the patience for. I've learned more about building a story under her guidance than I could have learned just about anywhere else. She's a real believer in nurturing the careers and the talents of her clients. We all need agents to sell our work, but having Jenny's input on my writing has been invaluable. She's met and exceeded my expectations in every way, and I couldn't ask for better.
Thank you, Sarah! I'm so excited to have had the honor to paint Isabel.
--Realm
___
Enjoyed this interview? If you're an author, editor, agent, or illustrator and would like a five question interview and a drawing of your character (or of yourself), email me at rtlovejoy (at) yahoo (dot) com. Check out the FAQ page for more info.
Labels: author interview