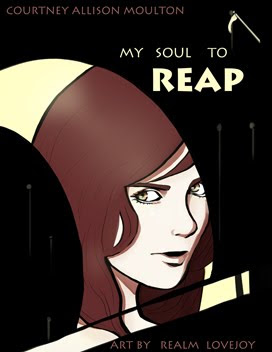 I hope you're all getting in the mood for Halloween next month! Today we have something a bit on the spooky side! Courtney Allison Moulton currently has a YA fantasy about death reapers out on submission! She is represented by Elizabeth Jote.
The illustration I drew is of the 17-year-old MC, Ellie. The book has such an iconic title, I wanted the drawing to be iconic too. When Courtney saw this, she wrote, "Ellie looks so ready to whoop some reaper ass." GO, ELLIE!
1) What is MY SOUL TO REAP about?
MY SOUL TO REAP is the 100,000 word first installment in a young adult fantasy trilogy.

When seventeen-year-old Ellie starts seeing reapers--monstrous creatures who devour humans and send their souls to Hell--she finds herself on the front lines of a supernatural war between Seraphim and the Fallen and faced with the possible destruction of her soul.

A mysterious boy named Will reveals she is the reincarnation of an ancient warrior, the only one capable of fighting the reapers, and he is an immortal sworn to protect her in battle. Now that Ellie's powers have been awakened, a powerful reaper called Bastian has come forward to challenge her. He has employed a fierce assassin to eliminate her--an assassin who has already killed her once.

While balancing her dwindling social life and reaper-hunting extracurriculars, she and Will discover Bastian is searching for a dormant creature believed to be a true soul reaper. Bastian plans to use this weapon to destroy Ellie's soul forever, ending her rebirth cycle. Now, she must face an army of Bastian's most frightening reapers, prevent the soul reaper from consuming her soul, and uncover the secrets of her past lives--including truths that may be too frightening to remember.

2) What inspired you to write about death reapers?

Well, I've always loved monsters, especially really scary ones. When I was plotting the book, I knew I wanted to make it about an eternal war between angels and demons, but I needed an in-between monster to fight the war in the mortal world and control the fate of human souls. So, I ended up inventing my own versions of Grim Reapers who come in many different forms from SUV-sized bear-like reapers to skeletal dinosaurid creatures that fly. These reapers--the demonic reapers--are descendants of the offspring between the Fallen angels who became demons in Hell. There are also angelic reapers who are far less frightening, but no less powerful, and are descendants of the offspring of the Grigori angels--Fallen angels who did not become demons and instead became earthbound because they weren't as nasty.
3) How do you go about designing your characters?

When designing a reaper, I pick the scariest, most twisted things I can come up with and create freaks. I like to combine different aspects of different animals and blend them together so the creation is almost seamless and not something that looks like a chimera. These aspects are things like shark teeth, horns, wings, talons, and tails on shapeshifting creatures that can otherwise resemble human beings. When making a monster scary, it's also important for them to act scary and not just look it. I think that really makes the monster complete. To be honest, Freddy Krueger wouldn't be so scary if he used those knife fingers to make flower arrangements.

4) What's your advice on writing a first draft?
Strangely, I'm very gullible and I trick myself into writing more than I need to every day. Sometimes writers can get intimidated when they think too hard about how long their novel is going to be. I mean, the average book is 80,000 words or so, and (holy crap) that is a lot of words. In school, it's a struggle to write a 3,000 word term paper (mostly because those suck). A single novel is like 999,999 term papers (only way more fun, but still a lot of work. Also, I'm a writer and therefore incapable of doing basic math). For me, I set small goals like 2k words a day. That is easy enough, right? When you write twice as many words as your small daily goal, that's a great feeling. It makes you feel more confident about all those tens of thousands of words you'll be writing to finish that book. I work with word count widgets and they are always set 2k words more than what I actually have written, and that way I glance at my widget and think, "Wow, this goal isn't far off. This should be a piece of cake to reach that next milestone!" By sticking to this, I wrote the first draft of MY SOUL TO REAP in 4.5 weeks. I also work on a detailed chapter-by-chapter outline so there's never a point when I'm writing a book that I'm stuck not knowing what will happen next.

5) Writing about death reapers, you must have discovered intriguing things about them as you delved into the concept. Can you tell us a bit about your discovery? (Without spoilers, of course!)
I did! Religious studies, to me, are extremely fascinating and pretty darn cool. Much of the reaper mythology in my book is derived from Old Testament texts and Jewish Angelology, with huge twists of course. I'd read that Lilith (the queen of demons) and Sammael (an angel of death) had evil monster-babies together, and I decided they would be evil people-eating soul-stealing monster-babies in my book. I studied a lot about different angels and their purposes and powers, as well as their relationship with humans. My heroine, Ellie, also has her origins very much entwined with the world of reapers, demons, and angels.
Thank you for all the great informative answers, Courtney!
--Realm
_____
Enjoyed this interview? If you're an author, editor, agent, or illustrator and would like a five question interview and a drawing of your character (or of yourself), email me at rtlovejoy (at) yahoo (dot) com. Check out the FAQ page for more info.
Labels: author interview