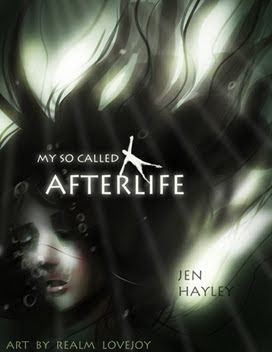 Today we have YA paranormal author Jen Hayley joining us. Her book MY SO CALLED AFTERLIFE is currently out on submission. She is agented by Miriam Kriss from Irene Goodman.
The illustration here is of the 17-year-old MC, Cassidy. She is a surfer that dies in the ocean. As soon as I read that, I got a vivid picture in my mind and knew what to draw for her. I remember falling off the surfboard and being crushed under the waves. It's a spooky feeling. Ever since, I dream about ocean waves often.
1) What is your book about?

MY SO CALLED AFTERLIFE is about a teenage girl named Cassidy who meets an untimely demise just before the start of senior year. When she dies, she discovers a strange afterlife complete with crossing over classes at the Academy, hanging around an overgrown cemetery with hundreds of other ghosts, and fleeing from a contamination that would cause her to remain a ghost forever. But it turns out the Academy has a different agenda than they advertise. Instead of helping souls cross over, the Professors eat them. And Cassidy has to find a way to stop them.
2) What inspired you to write the story?

This is going to sound cliche, but I got the idea when I was half-asleep. My imagination was going wild, like it usually does when I'm snoozing, and I suddenly had this image of a ghost girl who wants to get back to her friends, specifically her boyfriend she left behind. Then, an image popped into my head of ghosts sitting around a classroom, and I had to figure out why they were there.

The inspiration behind the cemetery came from a trip to South America I took with my MBA group last February. We visited La Recoleta Cemetery in Buenos Aires, Argentina, and it was so absolutely beautiful I wanted to use it in a novel. Even though the cemetery in MY SO CALLED AFTERLIFE is in New Jersey, I based some of the design and layout of the statues and mausoleums on La Recoleta.
3) What's your best revision tip for authors?

Be open to feedback. My manuscripts have really improved since I found a critique partner and a couple of solid beta readers. They offer the best suggestions, the best critiques and the best support. Sometimes it isn't easy to hear, but if you find a critique partner you respect and trust, it will take your manuscript to a whole new level of shiny.
4) How do you like working with your agent, Miriam Kriss?

Miriam knows her stuff. For MY SO CALLED AFTERLIFE, she was spot on with her revision notes, and the manuscript is ten times better because of it. She took me on and pushed me to do better, and it was because of her that I really learned how to do revisions. Plus, any time we talk, I can just hear the enthusiasm for this industry in her voice. She loves her job and her clients. I feel lucky to have her in my corner.
5) In the art of storytelling, what is the most important thing to you?

Everything begins and ends with characters for me. Any idea I've ever had starts with a character. Sometimes it's just a flash of an image, and I have to know what her story is. Who she is and why she looks sad, angry, wistful or in love. I also think that's what readers connect with the most. Stories full of adventure, romance and mystery grab readers and pull them in, but it's the characters that keep them reading.
Thank you, Jen! I agree...Characters tend to takeover my manuscript as well! Can't wait to read MY SO CALLED AFTERLIFE!
--Realm
_____
Enjoyed this interview? If you're an author, editor, agent, or illustrator and would like a five question interview and a drawing of your character (or of yourself), email me at rtlovejoy (at) yahoo (dot) com. Check out the FAQ page for more info.
Labels: author interview