GIVE AWAY WINNER for "Sweet Life" drawing...

The creatures that lurk in my house are hosting the drawing ceremony for the give away of THE SWEET LIFE OF STELLA MADISON.
Behold, the pile of names from the comments from the Lara M Zeises interview: 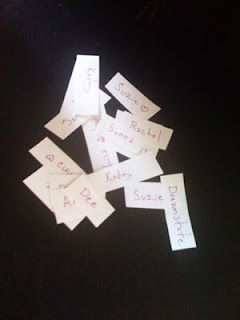 It all goes into the skull pot o' luck: 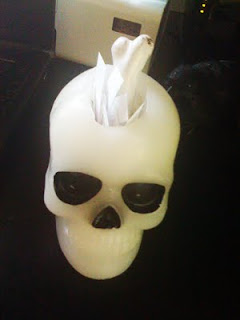 My cat, Baron, is the inspector, making sure everything is fair and square: 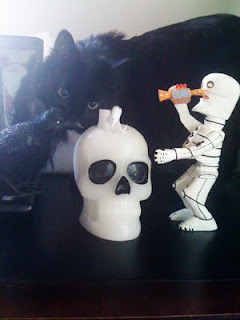 She looks up to signal her approval: 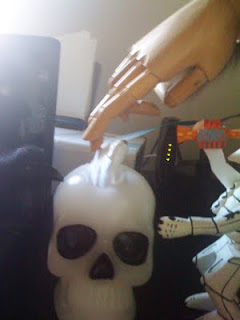 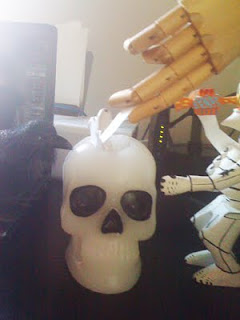 It's Jenn!!!!!!!!!
She had two raffles for sharing her restaurant memory. Here's Jenn's restaurant memory:
"Hm, I don't have a particularly funny experience at the mall; my family is all pretty calm. But my favorite memory of a resturant is probably at McDonald's at midnight during a roadtrip. I'm starving then, and chicken nuggets are my addiction."
Fitting, considering Stella Madison's favorite food is fast food!
JENN I will be sending you an email!
Everyone, thank you for participating!!
Also, as a closing note, here's everyone's memories:
The silly one: when I was nine and my little sister was three. We went to a sit down pizza hut with my grandparents and cousins who were in town, and these two guys with really long 80s hair and lots of jewelry and sat down near us. My sister couldn't stop watching them, and at one point she pseudo-whispered to my Mom "Hey mom look at the girls..." but my mom shushed her. So she tried again, louder "Hey mom look at the funny girls." My mom shushed her again so she got even louder - so she was yelling and she said: "Hey mom look at the funny girls with the hair all over itself." And everyone looked at the two guys. I was mortified then, but it's a funny story to tell people now.
--Suzie
Shortly after I decided to jack in my publishing job and go to culinary school, my husband and I won a gift certificate for a *very* pricey restaurant in the city. It had an open kitchen, run be a famous chef who was an idol of mine. My poor husband...I spent all evening watching the kitchen and barely spoke a word to him the whole night! (This is probably not my husband's favorite restaurant memory!)
--Dreamstate
Probably the first time I ate Indian food, which was my freshman year if college. Less to do with the restaurant (which was very nice, but largely unremarkable), and everything to do with the food, which knocked my socks off. I grew up on backwoods Maine fare-- boiled cabbage & potatoes, fiddleheads, etc.-- and I never knew there could be so many tastes in one dish before I had my first mutter paneer with garlic naan.
--Sunna
I think my favorite restaurant memory has to be the first time I tried the cheese ravioli at a local restaurant in my home town. When I was younger, I was a ridiculously picky eater. I lived on Cheerios and more Cheerios, with the occasional plain pasta thrown in. So one night my family went out to eat with a big group of friends and I had to order something that I had never tried before. I realize cheese ravioli isn't the most interesting thing I could have chosen, but this dish was DELICIOUS! I've gotten it every time I've been there since I was about twelve years old... which was quite a few years ago.
--Dee
My favorite memory is...hm...probably the time my Dad took my little brother and I to Texas Road House. My brother saw people throwing the peanut shells on the floor, and he got very upset (he was five) and said they were making a mess. When my dad explained it was okay, my brother proceeded to eat like fifty peanuts and throw every shell--with passion!--on the floor. :D So funny.
--Kody
Thanks for sharing your memories, everyone!
Cheers!
--Realm
P.S. Guest-bloggers, send me your book-related article today by midnight! Tomorrow noon at the latest so that I may schedule it up! Thank you! If you didn't hear back from me about your article, I didn't get it, so send again. My email is rtlovejoy (at) yahoo (dot) com.
Labels: give away winner