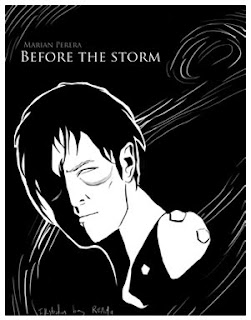 Author interviews are back! Today we have author Marian Perera. She is a laboratory-technologist-in-training by day and a fantasy writer by night. I asked her how she got into laboratory technology and she said, "I’ve always been fascinated by diseases, especially those caused by microorganisms. It’s like an arms race with microbes on one side and humans on the other. And since I love writing fantasy novels with scientific slants, what I learn comes in useful out of the laboratory as well."
Pretty cool author, huh? Her new adult fantasy book BEFORE THE STORM is out this month from Samhain Publishing, so be sure to check it out.
The illustration featured is of Mayerd -- the captain of Lord Robert Demeresna’s household guard. He’s a foreigner, but he’s also mentally crippled so that he can no longer use magic. Marian described him as, "He rarely smiles and never laughs. He’s loyal and brave, but he’s also hiding an ugly secret. " So I gave him a dark look -- probably my favorite way to draw.

1) What is BEFORE THE STORM about?

A baron and a whore who fall in love as they struggle to save their land, although they know their relationship is more doomed than the land.

2) From the description I read, the setting sounds very interesting. Can you tell us more about the world the story is set in?

If Victorian England and medieval fantasy had a bastard child, that would be Dagre. It’s a land of manor houses and ancient castles, elegant banquets and clandestine plots. The official religion, propagated by a church called the Quorum, involves worship of the Benevolent Ones. But the Quorum is also – in secret – experimenting with scientific devices that can be used in war.

Dagre’s dual nature runs deep. Dagrans consider themselves far more civilized than the people of neighboring lands, yet foreigners are viewed with suspicion or treated with cruelty if they happen to be magic-users. It’s also acceptable for the nobility to own and use certain women, but those women are referred to by the polite term “mares”.

This deeply flawed condition parallels the state of the world. Dagre is one of the lands in the continent of Eden , which was once perfect. But now it’s corrupted, and each land reflects the Fall in a different way.

3) That's a great description of Dagre! What inspired you to set your story in a medieval world with steam engines?

Dagre is on the verge of the Industrial Revolution, and whenever I think of that turning-point in history, I think of steam engines.

Plus, it was sheer fun to play with war-engines that have spiked wheels, like the ones on Messala’s chariot in Ben-Hur. With the added bonus of blowing up real good in the battle at the end.

If I condensed it to three points…

1. Know what has been done and what could be done. Read both speculative fiction and non-fiction like Jared Diamond’s Guns, Germs and Steel.

2. Make the world different in as many ways as possible. There’s not much point in having a five-armed purple-skinned alien who calls his girlfriend Sweetie – unless the story is a parody. The mentality and culture of alien or fantastic races needs to be different as well.

3. It’s about the story. Original worldbuilding is great, but don’t let the plot come to a halt so someone can explain the history of the world or the intricacies of the magic system. Ideally, worldbuilding should make readers want more, not less.

5) Great advice! Many of us are curious about all the different publishers that are out there. Can you tell us about your experience working with Samhain Publishing for BEFORE THE STORM?

My favorite part of the Samhain experience has been working with my editor and with the artist who designed the cover of my novel. Not only are they both very good at what they do, it was easy to communicate with them and develop my manuscript into the best possible book.

I’m also pleased with my sales – and those are just from the e-book. The paperback will be released in February of 2011. So all in all, it’s been a very productive experience that I’m hoping to repeat with the sequel.

Sounds awesome. Communication is everything. Marian, thank you so much for the interview!

Readers, check out BEFORE THE STORM here.