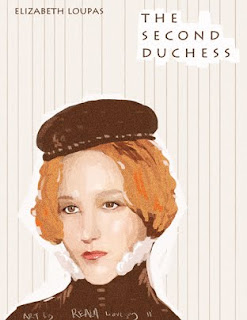 Today we have historical fiction author Elizabeth Loupas joining us! She is represented by the fabulous Diana Fox and her debut book THE SECOND DUCHESS just came out from NAL.
For the illustration, I drew the 26 year-old Barbara of Austria, the main character of THE SECOND DUCHESS. I wanted her to look as unique as she does in her historical depiction.

1) Welcome to The Blog, Elizabeth! What is THE SECOND DUCHESS about?

It’s about three people—a Renaissance duke and his two duchesses. The duke is Alfonso II d’Este, the last Borgia duke, grandson of Lucrezia Borgia, ambitious, powerful, resplendent. His first wife—only fourteen when he married her, only seventeen when she died mysteriously—was the beautiful and wayward Lucrezia de’ Medici. Did he murder her, or have her murdered? Everyone whispers but no one dares accuse him. Then he takes a new bride, Barbara of Austria, and Barbara finds she cannot rest until she knows exactly what happened to the duke’s first duchess...

2) What an intriguing concept! What inspired the story?

It’s a riff on Robert Browning's poem “My Last Duchess.” I’ve always loved the poem and have probably read it a thousand times. Then one day when I was tutoring a high school student through an essay on Browning, it struck me: what, exactly, did the second duchess have to think of all this?

3) I'm curious myself. What was your process for developing the heroine Barbara of Austria?

At first I thought Browning had made up his duke and duchesses. When I started to dig around I found that he’d based the “story” of his poem very loosely on real historical personages. So I started reading everything I could get my hands on, in English, Italian and German. (I had to get the Italian and German sources translated.) I based my Barbara on the historical Barbara as closely as I could. Even her looks are based on a real portrait.

4) How did you go about weaving your historical research into this fiction? Any finds that particularly made an impression on you?

It sometimes seemed as if I had to stop one sentence at a time to look things up. I collected everything I could find. The first images I found of Alfonso were engravings, and quite stylized. Then one day I came across a stunning painting of Alfonso as a young man, and his personality simply leaped to life.

Other great finds were images of objects in museums—the poison flask, the thumbscrew, the chess set, Barbara’s saddle.

And the books Barbara and Alfonso owned! I Modi is a real book, originally published in 1527, and the engravings will simply make your eyes pop out.

It took me several years to write the book itself—it was a start-and-stop project. Toward the end of that period I began to focus on the book seriously, finished it, polished it, and started sending queries. There were a few bumps and bruises along the way, as virtually every writer experiences, and I’m very fortunate to have ended up with the fantastic Diana Fox as my agent and NAL as my publisher!

Congrats, and thanks for joining us, Elizabeth!