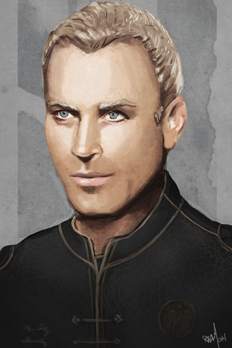 When I first drafted the series Lancelot was meant to be a minor background character but he quickly came to the foreground and will continue to play a key role in the series. Lancelot serves as the new High Knight in Camelot and is the only major character who doesn't use magic.

In the Arthurian legend, he is certainly my favorite knight. I imagine him to be super badass. A lot of other versions of Lancelot feature him as brunette, a bit emotional, and a do gooder. My version is pretty much the opposite of other versions but I hope readers enjoy his character.

Here's an excerpt with Lancelot that I think shows he character well:

A recorder is on the table. He flicks it on. He sees the bewilderment on my face and doesn’t look away as he lights a cigarette, which I’m sure is not allowed in here.
“Gorlois must be proud that you’re in Arthur’s Round to serve the King.”
His cigarette smoke is already suffocating me.
Lancelot studies me. His eyes are silver and searing. The first thing I think of is a knife. His eyes are weapons—and he knows the affect they have on people, especially women. His mouth curves into a smile, deliberate and slow.

I hope you enjoyed meeting him! We are nearing the end of the portrait reveals for this book... Last will be Vivian!