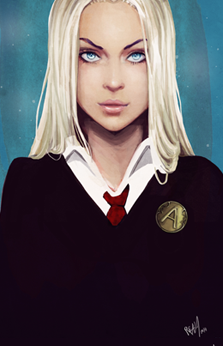 Vivian is a super important character in the Arthurian legend that I think the average person is probably unaware of. (Most know Arthur, Merlin, Lancelot, Guinevere.) Vivian is just as important... she's the Lady of the Lake (iconic image of hand holding sword in the lake). She gave Arthur the famous sword Excalibur. Did you know that the wise genius Merlin had a lover? It's Vivian! Vivian took down Merlin--she was his end. She's super powerful and underestimated, just as Morgan le Fay is.

Most portray Vivian as a wise and tranquil lady. I made mine a bit abrasive and self-obsessed. (After all she is based on a woman who imprisoned her love!) I really enjoy writing and drawing Vivian.

Here's a scene where Morgan le Fay speaks with Vivian for the first time:

I spot Vivian reading by herself at one of the tables. Her head is propped in her hand, causing her hair to curtain down one side of her face. She looks deeply bored by whatever she’s reading. I walk up to her.
“Hi,” I say. “Vivian, right?”
She looks up at me, her expression unchanging. “Do I know you?” she asks.
Of course she does. I fight the urge to scowl. “Um, I’m in Arthur’s Round.”
Vivian frowns at me. If there were a competition for the world’s most condescending look, she would win. “No shit,” she says.
“Clearly, you’re not here to make friends,” I say, mustering a smile.
“Do you want something?”
“Uh,” I begin, hesitant. “You know, I was really impressed with that magic you showed at the welcoming party. How did you learn that trick?”
“I learned in a quiet place alone. I learned by not having people distract me and talk to me.”
I grimace but try to remain friendly. “What inspires you to hone your magic?”
Vivian gives me another hostile look of disgust as if I were a leper. She picks up her book, pushes her chair back, and walks away. I blink, stupefied. What is her problem? I’ve never even talked to her before. Fuming, I walk off, no longer in the mood to study.
Consider yourself suspect number one, Ice Queen.

Looks like Morgan met her match! I hope you enjoyed the portrait!