Happy Saint Patrick's Day! To celebrate, I will introduce you to Isolde Anguish, one of Morgan le Fay's friends in the LE FAY series. Isolde is Irish, and my audiobook narrator did a nice job with her accent in the audiobook versions.

In the legends, Isolde is an Irish princess. In my version, she is a knight gifted with wind magic.

Here's my drawing of Isolde with her hair down. (She normally wears a pony tail.) 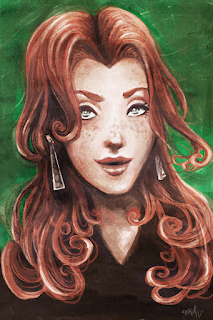 A Luminary comes at me with a sword made of ice in his hand. I freeze in shock. Something whistles through the air. It’s made of metal, and it hits the man in the neck. He falls face down, his ice sword shattering across the ground. The dagger in his neck is something I recognize from Arthur’s Round. An aerodagger. I look up in the direction from where it came.
A female figure wearing a Black Knight uniform stands atop a building, holding a large glider. She drops from the building and swoops down, sailing over us. I recognize the glider. I’ve seen it in my childhood while I was on the run with my mother in the woods more than ten years ago. It’s used in the military by wind users.
More aerodaggers rain down from above. The Luminaries break into startled cries. Some form an ice shield over their heads. The glider is about to hurtle into a building. I gasp before it turns away seconds before impact, controlled by wind magic.
Someone conjures an icicle and shoots it at the glider. The dagger of ice hits the wing, and the glider wobbles before it swerves downward. As it descends, I see the brightness of auburn hair—Isolde has been controlling it.