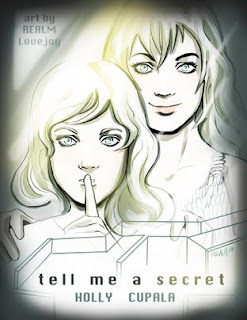 I've waited a long time for this day! My friend Holly Cupala's debut novel TELL ME A SECRET (HarperTeen) is out! YES! Why does Holly rock? Check out this post I wrote about her. (Also features her art work.) A fellow Seattlelite, I met her at Justina Chen's book reading. Holly is a very warm, creative, and organized author. If you take a look at her blog, you'll see just what I mean! Not only that, she is a Readergirlz diva.
Also, stay tuned at the end of this interview for prize info for commenters for all blog tour stops!
The illustration featured for this interview is of Miranda, the main character of TELL ME A SECRET. She is standing in front of her older sister, Xanda. I wanted to use smokey tones with a glow of yellow, like a candle that's been lit on a rainy day. I've always felt that TELL ME A SECRET was a story about hope and finding your inner light to illuminate the way.

1) Thanks for joining us today, Holly! What is TELL ME A SECRET about?

Thank you for having me, Realm!

TELL ME A SECRET is the story of Miranda Mathison – seventeen, and on the cusp of everything she wants…art school as far from her family as she can get, a seductive friend with access to the secret world of her bad-girl sister (who died mysteriously five years before), and a dreamy boyfriend to take her to the ends of the earth – or at least to Boston, where they both want to go to school. The problem is, Miranda has a secret of her own that will shatter everything she hopes for: a positive pregnancy test.

It’s a little bit mystery, a little bit relationship story, a little bit family, and even a little of suspense. Almost everyone has a secret, and things aren’t always as they seem. At its core, it’s about forgiveness, identity, and finding a way into the future.

2) What inspired the story?

A very sad chapter in my own life – two significant losses. I almost stopped writing altogether. Then Justina Chen (who wrote the wonderful book NORTH OF BEAUTIFUL) took me aside and asked if I planned to write about it. We had lost our daughter at birth, which was devastating – but somehow, Justina’s question opened a door I had thought to close. Right after that, we went to hear Libba Bray speak about “How to shut off your brain and get to the heart of your writing,” and suddenly it was right there, like a movie trailer in my head. I wrote it all down in the notebook – just found it not long ago, actually, and the story had for the most part followed that initial inspiration.

It wasn’t an easy book to write, but surprisingly, it was very healing. As Miranda struggled to make sense of her sister’s death and deal with a pregnancy, I did the same. In the end, we both found a kind of hope.

3) I'm very sorry for your loss, Holly. I'm glad that TELL ME A SECRET helped you heal and know what you mean about how writing can suddenly be born like a movie trailer playing. Can you tell us about how you wrote TELL ME A SECRET and your journey toward getting it published?

One sentence at a time…until it wasn’t so painful anymore. Then I received an SCBWI Work-In-Progress Grant, which was such a signpost! I kept going. At some point I realized I would probably need an agent. One disastrous agent meeting taught me I wanted to sign with someone who really got the work (grokked, for the sci-fi geeks out there!). I eventually found that agent – the most awesome agent ever, Edward Necarsulmer IV – quite randomly at an SCBWI conference. We worked on polishing it for a couple of months, and he sold it to my pie-in-the-sky dream editor in just a few weeks. It was kind of unbelievable!

4) Sounds like a dream! You have a great connections with readers through your blog. Also, you're a Readergirlz diva! What's your advice for networking and building a platform?

Thank you! I started my blog when I found out about the grant – they told me a couple of months before it would be announced, so I had time to get myself ready (sort of). At first I just blogged about the struggle of writing and finishing a novel. Over time, more readers came, I joined the readergirlz team, and eventually I sold the novel. So my content has evolved to reflect the shifting audiences of friends, the writing community, kidlit bloggers, and ultimately teen readers. I try to have something for everyone!

I also attended one of the amazing kidlit blogger conferences with readergirlz, and that was huge in terms of cracking open the blogging world. I came away with a great community of friends and some terrific advice.

5) Speaking of your blog, you have an awesome Summer Revision Smackdown program on your blog! Can you tell us about it and give us your best revision tip?

I was 20K words behind, and all I had was a laptop, a timer, and some licorice to motivate me. So I set my timer for 15 minutes…and wrote 400 words! I ended up writing 5K that day. Jolie Stekly saw it, and she decided to try it, too. The next day, we did 5K again…and again and again, until we finished.

So when summer rolled around, we both had novels to revise. I think it was Jolie who said, “Let’s crack the whip and get these revised!” So it started as just the two of us and ballooned to hundreds of participants. We got everyone we knew to contribute revision tips, and here we have the entire compendium.

Let’s see…my best revision tip? I’m so bad at revision—that’s why we had to do SRS! I’m kind of a big picture girl—the hard part is figuring out all of the little, detailed points from start to finish. And my least favorite part is writing dialogue. So I have developed this wonderful, top-secret method of dealing with dialogue…I call my best friend, Amy! She writes for the stage and is awesome at dialogue, and we’ve known each other since high school so she knows everything.

There’s this one scene in TELL ME A SECRET involving one of Miranda’s friends—I was down to just that scene with no idea how that was going to go down, so I called Amy. She asked me a couple of questions, and out of nowhere the answer hit me…the friend had a secret, too! And crazily, the groundwork for it was already there. I didn’t have to change a thing. So Amy is my secret revision weapon. It’s really helpful to bounce ideas with a friend.

Speaking of friends—thank you so much, Realm, for inviting me to your blog!

Thank you so much, Holly! I'm very much looking forward to reading all of TELL ME A SECRET and will be cheering you on! (Already started the book -- loving it!)
Readers, if you're interested in TELL ME A SECRET, a two-chaper preview can be read here, and it can be purchased here.
The next stop for Holly's tour is...tomorrow at Little Willow's Bildungsroman! You can also view the full tour schedule here.
______

• Tweet about the tour (@hollycupala) and tell us what you think!

Each week's prizes will be announced at Holly’s blog the following week - check back to see if you've won and contact us at the contact link at www.hollycupala.com (we will hold prizes for 2 weeks).

* Comment calculation: for instance, during week one you can comment once at every official stop, and once on any of my posts for that week to be entered in that week's prize drawing.

Cheers!
--Realm
_____
If you're an author, editor, agent, or illustrator and would like a five question interview and a drawing of your character (or of yourself), email me at rtlovejoy (at) yahoo (dot) com. Check out the FAQ page for more information!
Labels: author interview