Today I am sharing a new Le Fay character portrait. One of the new characters introduced in GRAIL: 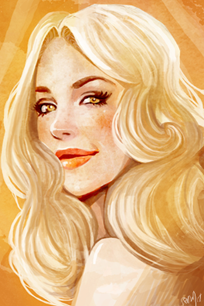 In the old Arthurian legends, there are a few versions of Elaine--two which are particularly well known: one that is associated with the Grail, and one that is the tragic figure that falls in love with Sir Lancelot. For my version of Elaine, I chose to combine both aspects in different ways to create her. In the Le Fay series, she is the Grail Guardian, wise, strong, radiant. In HENGE you may remember that Lancelot had a photo of a blonde woman in his wallet... Well now you know who it is! Though she doesn't appear as much as the other female characters in Le Fay, I still view her as one of the core characters.

Here's a scene with Elaine:

“Don’t harm her,” Merlin says, pulling his Maven badge out of his pocket. “We’ve the legal right to be here.”
“What is that?” the lady demands.
“It’s the Maven badge.”
“I mean, why do you have it? You don’t look like Mordred to me.”
“Mordred is no longer Maven. King Uther is dead.”
The gun barrel slowly moves away from my head.
“Let me see that,” the lady says.
She walks forward, away from me.
Her head is a shock of golden curls cascading down to just below the shoulder blades. She wears torn-up jeans and a sweat-stained tank top. Her demeanor is mature though she appears young—perhaps around five years older than me.
Merlin hands her his badge. As she inspects it, Merlin explains to her the events that led up to King Uther’s accidental death. The lady pales as he finishes the story.
“Is everyone else all right?” the lady asks.
“Yes,” Merlin assures. “I understand your shock. After all, you’ve been isolated from the world for years, isn’t that right, Elaine?”
So it is her. The statue of the fountain lady swims through my mind.
“You’re the Grail Guardian?” I ask her.
Elaine turns to face me and nods. I see then that there is a glow about her. Her eyes are otherworldly, deerlike and amber-colored.

I hope you enjoyed meeting Elaine!