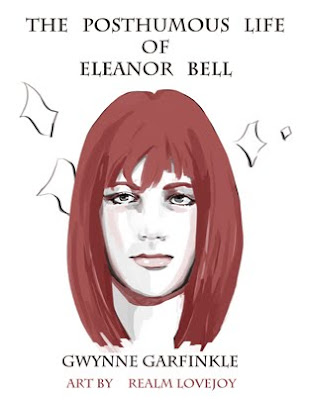 Today we have author and poet Gwynne Garfinkle joining us! She has written a literary novel with vampires called THE POSTHUMOUS LIFE OF ELEANOR BELL, which she will tell you more about. Her agent is none other than the fabulous Diana Fox--whom was interviewed here not too long ago! Also, be sure to check out Gwynne's blog.
The illustration featured here is of Eleanor Bell, the main character of Gwynne's book. Since she was inspired by Sylvia Plath, I wanted to make Eleanor a little haunting and mysterious.
1) Thanks for joining us, Gwynne! What is your book about?

THE POSTHUMOUS LIFE OF ELEANOR BELL is about a sort of "vampire Sylvia Plath."  Eleanor Bell is a poet who becomes famous after her death.  Everyone thinks she killed herself, but she actually became a vampire.  She can't publish any new work, because when she sends it out under a pseudonym, the editors all think her work too derivative of herself!  In order to reclaim her career, Eleanor must "come back from the dead" and deal with the daughters she left behind.

2) I've always wondered what it'd be like to be an immortal author! What inspired you to write it?

I've been interested in the work and life of Sylvia Plath since I was a teenager (like many teenagers, I suppose).  I've been a fan of horror tropes for even longer, since I fell in love with the 1930s Universal monster movies when I was a kid.  Many years later, Buffy the Vampire Slayer reawakened my interest in those tropes, and I got to thinking about what a natural vampire Sylvia Plath would be!  When I began to write the novel, the character of Eleanor diverged from Plath in a number of ways, which gave me the freedom I needed to tell the story.

3) What did you learn from writing poetry and short stories?

From poetry, I learned to focus on the rhythms, sounds and meanings of words at a micro level, which is useful to a writer no matter what genre you're working in.  I don't write as many short stories as I would like to (though I have one coming out in the new Clockwork Jungle Book issue of Shimmer Magazine, and last year Strange Horizons published my story "In Lieu of a Thank You," about a mad scientist).  Generally when I come up with ideas for fiction, I gravitate towards the long form.  Working on a novel doesn't leave me much mental space for short stories, though I do sometimes write poems while writing a novel.  In the case of ELEANOR BELL, I included poems that were "written by" Eleanor.  Writing Eleanor's poems was quite a challenge, since Eleanor's poetic style is different from mine!

I love working with Diana.  During my agent search, I kept hearing advice about how important it is to find just the right agent for you, and I didn't quite get what that meant.  Then when I first talked to Diana, we really clicked, and I got it!  I feel so lucky to have the benefit of her expertise and advice, as well as her moral support.  She really gets what I'm trying to do with my writing, and her critiques of my work are spot-on.  The publishing business can be tough, and it really helps to have an advocate who is also a lot of fun to talk to!

5) Say you have a scene you are about to write...What's your process for writing it to your satisfaction? Do you plan it beforehand or explore the scene as you write it?

It varies from scene to scene.  I will have an idea of what purpose(s) a scene is going to serve, but I do like to leave room for the unexpected.  My characters often have strong minds of their own.  Sometimes I need to lay down the law, but sometimes it's better to let them have their way--if they surprise me, they may well surprise the reader too!

My scenes often begin as dialogue.  That's what comes easiest to me, and it's what I change the least.  (My dad was a screenwriter, so I may have inherited some kind of dialogue gene from him.)  Sometimes I'll write the dialogue, action and minimal description first, then go back and fill in what's needed.  At that point I may close my eyes and visualize the scene, then revise accordingly.  My fiction is often set in past time periods, so I also need to do a fair bit of research to include just the right evocative details.

I always begin with dialogue myself! It changes the least as well. Thank you so much for joining us, Gwynne! It was so great to interview you and draw Eleanor!
--Realm
_____
If you're an author, editor, agent, or illustrator and would like a five question interview and a drawing of your character (or of yourself), email me at rtlovejoy (at) yahoo (dot) com. Check out the FAQ page for more information!
Labels: author interview