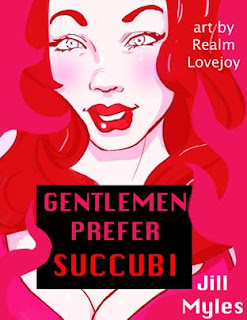 Ooh-la-la! Today we have a paranormal romance author Jill Myles in for the interview! She is represented by Holly Root and her debut novel GENTLEMEN PREFER SUCCUBI is now out! It's part of THE SUCCUBUS DIARIES series. Stick around till the end of the interview for info about a special prize for her blog tour commenters!
For the illustration, I drew the main character of GENTLEMEN PREFER SUCCUBI. Jackie Brighton was a dorky museum docent until she got turned into a succubus...Now she's got vampy hair, eyes, and a smokin' hourglass figure. Trouble is abound!
Now without further ado...onto the questions!
1) Thanks for joining us, Jill! What is GENTLEMEN PREFER SUCCUBI about?

It's about a dorky museum docent who wakes up one morning and finds herself in a dumpster. Which is weird, but when she crawls out of the dumpster, she finds out that even stranger things have happened - she died and turned into a succubus. And as a 'suck', she now has to answer to two different masters - a vampire and a fallen angel. Since succubi are treated as a little bit like free agents in the supernatural world, everyone has a favor to ask...
2) Sounds fun! What inspired the story?

I was working on a story about fallen angels, but it wasn't gelling. I went to lunch with my sister and we were talking vampire romances, and I cracked a joke about "what if vampires were sex starved instead of blood starved"? And it sort of blossomed from there. I made the heroine awkward and kind of bad with people, because I didn't want her to be ultra-beautiful AND competent. I wanted to see what happened when someone a little less competent suddenly got a hit with the immortality stick.
3) I've been hearing raves about this story! How do you keep your story exciting and fresh?

Aw, thank you! It's kind of weird to say, but for a long time, I fought what I was writing. I didn't want to write funny novels. Didn't want to write sexy. Didn't want to write adventurous stuff. I kept trying to tone it down and write some serious epic fantasy, but the funny stuff kept calling to me. And even when I wrote the serious stuff, people responded more to the funny bits that kept sneaking in no matter how hard I tried to get rid of them. Eventually I embraced it and decided that I didn't have to be a serious writer. I also tend to let my internal editor have free reign. I love thinking up bizarre scenarios, and instead of telling myself "No, that's stupid and outlandish - there is NO way that would happen in the story", I try to think of ways that it could possibly be included. Nothing is too weird or 'out there', it just has to make sense in the environment you're putting it in. I'm a big fan of including outlandish things in the otherwise normal world.

4) I quite agree! What was your journey toward this debut publication like?

Kind of textbook, really! With long pauses in-between. I wrote 4 novels before Gentlemen Prefer Succubi, and no one in New York was interested in them. After lots of revising and a year and half of querying (and 2 novels making the rounds), I got an agent in 2006. He shopped my book for a year and Pocket made an offer in 2007. And not long after I signed the contracts, my book got rescheduled out alllll the way to 2010. So it was hard to sit on my hands and wait for almost three years -- there were a couple of times I thought I'd go crazy with the waiting. But now that it's here, it was worth it.
5) What's it like to work with Holly Root?

Holly is pretty much bottled awesomesauce. I feel like I can lob her any stupid idea and she'll listen to it. I can call her in a panic and she never loses her cool. She's constantly thinking about ways to improve my career, and she's funny and so easy to talk to. Every time I talk to her, I'm impressed as to how together she is, and how market savvy. I really feel like I lucked out having Holly as my agent, even when she makes me rewrite the second half of my novel...AGAIN. Don't let that sweet demeanor fool you - she's a taskmaster! But I love her for it -- she won't let me get away with 'good enough'. It has to be great.
Wow! This sounds like such an exciting debut! Congrats to you, Jill! And thank you so much for being a part of this interview.
Readers--if you're interested in reading GENTLEMEN PREFER SUCCUBI, you can order it here.
Also, Jill is giving away a SUPER prize to anyone who comments on any of the blogs she's touring on this month. The prize is a free query critique by super agent HOLLY ROOT. Jill will announce the winner on the last day of her blog tour (1/27). More info on the blog tour is over at Shelli's blog!
Cheers!
--Realm
_____
If you're an author, editor, agent, or illustrator and would like a five question interview and a drawing of your character (or of yourself), email me at rtlovejoy (at) yahoo (dot) com. Check out the FAQ page for more information!
Labels: author interview