Shelli Johannes-Wells - ON THE BRIGHT SIDE 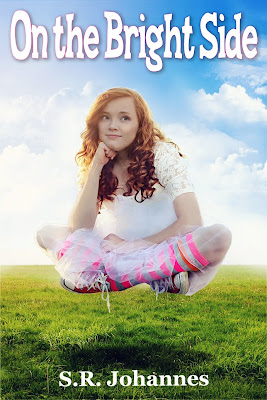 Shelli Johannes-Well just came out today with the eBook version of her new tween angel novel called ON THE BRIGHT SIDE. Shelli has an awesome blog with marketing tips for authors--go visit if you haven't seen it! Today, I am interviewing Shelli on the life cycle of her book and how it changed from the last time I interviewed her in 2009 about it. If you haven't seen the interview, please do check it out. I did a drawing of Gabby in the interview, which I've posted here again (below) in case you haven't seen it.
Here's more information on ON THE BRIGHT SIDE:
Gabby is a disgruntled tween angel who has just been assigned to protect her school nemesis and ex-beffie. Problem is her ex-beffie is dating Gabby’s longtime crush. Instead of protecting Angela, Gabby pranks her (since when is sticking toilet paper to her shoe or spinach in her teeth a sin?) Soon, Gabby gets out of control and is put on probation by her SKYAgent, who has anger management issues of his own. Determined to right her wrongs, Gabby steals an ancient artifact that allows her to return to Earth for just one day. Without knowing, she kicks off a series of events and learns what can happen when you hate someone to death. 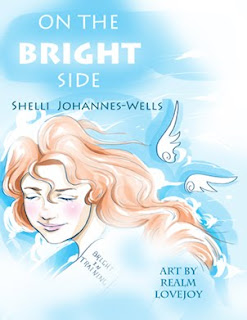 1. When did you first start writing OTBS and what inspired you to start it?

It was Dec 08 at Christmas time. I was subbing Untraceable to agents and needed to pass the time. The book started out as a darker YA from a dead person’s perspective.

In the spring, when other dark angel books started to sell, I started to think about how I could make this book different. I wondered if I could do a book about death in a humorous way and make it a little younger. Tweens is a tough market and I thought I could find a niche.

The question became “what if an angel is forced to protect someone she doesn’t like?" This brought back all the times I wished I could have been a fly on the wall, listening to my crush and eavesdropping on my frenemies.

Now THAT was much more interesting. I knew if I was going to do a middle grade or tween, I needed it to be more fun and light and adventurous. Something more like Meg Cabot or Ally Carter meets Harry Potter.

On the Bright Side is funny and light even though death, loss, forgiveness, and the fear of moving on are at its core.

2. Can you tell me about the whole life cycle of OTBS?

This is like the book that wouldn’t die – (pun intended ) My agent used to say that. Because it just kept going and almost making it.

When my agent signed me in May 09 with Untraceable, she had read a partial of OTBS and wante dto go out with that book first. After some revisions, OTBS went out on submission in Sept/Oct 09 and - within hours - went to a few editorial and acquisition meetings at some big houses. I actually ended up working for a couple months with an editor at Penguin on noncontractual revisions, adding in an additional 50 pages.

Unfortunately in Feb 2010 – it got rejected there, so I did more revisions and went out on more rounds over the next year, where I did a couple more noncontractual revisions that ended up falling through.

After a year and half and 3 rounds, OTBS was eventually shelved in Winter 2011. It was hard because it had gotten close so many times. I had rewritten it a few times and none of the noncontracual revisions panned out. That book was hard to put away. I felt like a failure.

After putting out Untraceable myself in the fall, I decided I owed it to this book to get it out before I started something new. I love Gabby and think the story is unique and fun at a time when so many books are dark. I wanted to test out the tween market. If there was one reason why this book didn’t sell – it was because they either wanted it purely middle grade or aged up to Young adult.

The beginning didn’t change much. I mean it opened the same way – with Gabby watching her funeral and being upset that someone would dare to pair Devil’s Food cake with Celestial teas.

But I added in more pages with her living and her first days in Cirrus (AKA Heaven) so you get to see her transition. So now you see Gabby and Michael and Angela before Gabby dies a tragic death (death by texting) and then you see Gabby up in Cirrus and how she gets oriented. I would say overall, this book expanded more and developed more. But the core was always there.

4. What was the most difficult part to revise in OTBS?

When I was doing a noncontractual revision for one house, they wanted the book to be even lighter than it was. There was a whole subplot with Gabby dealing with the grief of her mother. I felt those scenes were very poignant and as a mother - I loved them. But in the end, I agreed they were too heavy for the book – esp as a tween book - so I had to write her mom out of the scenes. I do miss those scenes. That editor had also wanted the adventure part gone – the parts where the dark side starts to chase Gabby because she is going against the Code of a Bright. But, I wasn’t willing to take those out. I think they had a level of light suspense.

5. What's something about self-publishing you learned that you want everyone to know (or wish someone told you)?

I wish I knew how many roles I would play. How hard it was. I thought I would put up a book and market it. I mean I knew I would do cover and copy and such. But the accounting, legal matters, and business aspect is hard. I am now calling myself an “Entrepreneurial Author” (nice ring to it right?) because it feels like I’m running a business. I have my own business in marketing and this seems harder to run because I constantly have to keep on something. Here is a post I did on the 30 roles I think I play almost daily.

Thank you for all the insightful answers, Shelli! I think tweens everywhere are going to love ON THE BRIGHT SIDE!

S.R. Johannes is the author of Untraceable (a teen wilderness thriller) and On The Bright Side ( a tween paranormal). She lives in Atlanta Georgia with her dog, British-accented husband, and the huge imaginations of their little prince and princess, which she hopes- someday- will change the world. After earning an MBA and working in corporate america, S.R. Johannes traded in her expensive suits, high heels, and corporate lingo for a family, flip-flops, and her love of writing.