The portrait reveals will now be one or two portraits per book since most were introduced in HENGE. Today I am revealing the portrait for SWORD. We get to know this character a lot more in SWORD... 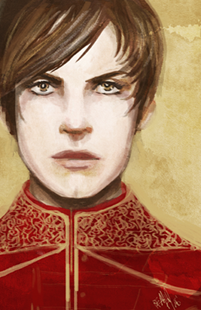 As we all know, Arthur is the most important character in the Arthurian legends. He's also important in the Le Fay Series, though we won't see his central role until later.

I wanted to make my Arthur a bit of a darker character since I like to work with contrast especially when it comes to major characters that can influence the plot. I wanted him to constantly struggle the duality of weakness and power; vulnerability and boldness.

Here's a scene with Arthur (I cut out spoilers):

King Uther walks in with Kay, Agravain, and Mordred by his side, and someone else who looks familiar trails behind him. A handsome teen with a frightened face. His hair is the color of autumn leaves. His earthy gaze meets mine.
“Morgan!” he says, his voice smooth and husky—a bit deeper than it used to be.
“Arthur?” I blurt out, shocked.
I recall that it’s April—his birth month. Arthur must’ve had his fifteenth birthday. He appears to have grown a couple centimeters, at least.
Uther puts an arm in front of Arthur. “How dare you refer to your prince by his first name!”
I continue to stare at Arthur past Uther’s arm, baffled by his growth spurt during my absence.
Arthur tries to move away from his father’s arm. “I’m so sorry, Morgan. I tried to tell them that you were nice to me—”
“Arthur!” his father barks.
“I didn’t want to see this either, but they—”
“That’s enough!”
Uther whirls around and strikes Arthur across the face with a loud smack. Anger flares in my stomach and I unintentionally try to yank my arm free from the knights. They hold me tighter.
“Violence is not necessary,” I shout. “This is a difficult time for—”
“Silence!” Uther barks at me, his eyes blazing.
A few tears trickle down Arthur’s cheeks, and he glares at his father in disdain as Kay puts a hand on Arthur’s shoulder to comfort him. Arthur shrugs his hand off. There’s a dark look in Arthur’s eyes, one that I don’t recognize.


Hope you enjoyed! Stay tuned for the next portrait for the third book. I'll be introducing a brand new character.