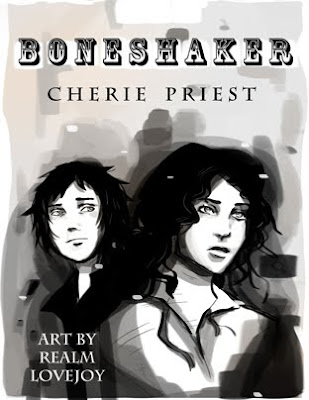 There's a hot off the press steampunk novel...BONESHAKER (published by Tor). Not only does it have a wicked jacket design, it sounds like the perfect fall read with thrills and zombies. I've got the author, Cherie Priest, here today! Cherie is a fellow Seattlite I met earlier this year. She is a young prolific author and a master of the steampunk world.
The illustration for this interview is of the two main characters, Briar and Zeke - the mother and son - in BONESHAKER. I thought a black and white vintage look would suit it best. I wanted some suspense and coldness in the picture too.
1) What is BONESHAKER about?
BONESHAKER is the story of Briar Wilkes, whose son Zeke runs away ... and she goes running right after him. They live outside what's left of Seattle in the late 1870s, after the city has been destroyed by an industrial accident--and then it filled with a toxic gas that turns people into zombies.  So the city was walled off, and general wisdom says that no one lives there anymore ... but general wisdom is rather wrong in that regard.  Inside the city are the walking dead, of course, and also a criminal underworld with a cache of tough survivors called the "doornails."

So really, this is the tale of how Briar and Zeke stumble upon these people (the good ones, the bad ones, and the ones who have yet to choose a side), and how they accidentally incite a revolution inside the walls.
2) What inspired you to write the story?
I moved to Seattle in 2005, and a couple of years ago I decided that it was time for me to write a story that was set here. This decision coincided nicely with a groundswell of interest in steampunk and all its peripherals, and Seattle was really the perfect spot to try something in that vein. Seattle's 19th century was an interesting, weird place, and it gave me many ideas to work from.

3) I can imagine. Do you have any advice for writing in the steampunk genre?
Be careful with your world-building. Don't focus on it to the exclusion of all else; because at the end of the day, most people won't stick around for a story about a place.  People keep reading stories about people.  So although the setting in a steampunk story is obviously very important, try not to overwhelm the reader with too much background and too many details.
4) Great advice! What kind of research did you do for BONESHAKER?
Well, I took the Seattle Underground tour nearly a dozen times (over the course of 3-4 years), and I spent some time in the local history room at the big downtown library; and sometimes I wandered down to the old cemetery down the street and steal names off tombstones.  19th century names have a certain ring to them that I just love.

5) I have yet to go on the underground tour, but want to! (For those that don't know, there is an abandoned city underneath Seattle.) On your Live Journal blog, you show a very productive work flow, updating the page with word counts often. Can you tell us your writing process and how you stay productive?
Keep in mind I maintain a part time day job as well--so mostly my workday looks like this:  I get up when my husband leaves for work about 8:00 a.m. and I do day-job work until noonish (depending); then I take a break and get some exercise, make myself some lunch, and whatnot; and then I sit down about 1:30 or so to write until my husband gets home from work around 5:30 or 6:00 p.m.

I do not naturally have a whole lot of discipline--and left to my own devices, I'd rather watch TV or surf the net than be productive. But if I treat my two jobs like one regular 40+ hour-a-week day job, it's easier to stick with it.  And I have to stick with it.  I have too many deadlines to just hang around and eat ho-hos all day.
I totally agree! Thank you so much for joining us, Cherie! I hope I catch you at the Secret Garden event! (Mark your calenders, Seattlites.)
You can purchase BONESHAKER here. (Wow--check out all the stellar reviews on there!)
--Realm
_____
If you're an author, editor, agent, or illustrator and would like a five question interview and a drawing of your character (or of yourself), email me at rtlovejoy (at) yahoo (dot) com. Check out the FAQ page for more info.
Labels: author interview