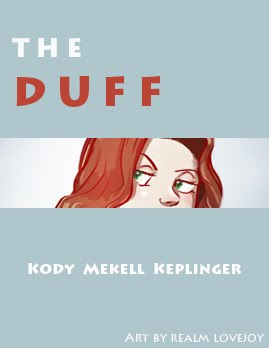 Today we have one of my agent sisters Kody Mekell Keplinger joining us! She's a YA author and a young adult herself at age eighteen! Her agent is Joanna Stampfel-Volpe, the same as mine. Kody and I got to know each other recently and I immediately adored her. She's super friendly and nice. Her book THE DUFF is coming out from Poppy/Little Brown in fall 2010!
The illustration is of the main character from THE DUFF, Bianca. She is seventeen years old. You can see in her eyes that she has a lot of attitude! I really wanted to portray her cynical personality.
1) What is THE DUFF about?

Seventeen-year-old Bianca knows she’s the Duff (the designated ugly, fat friend).  So when Wesley, a notorious womanizer, approaches her at a party she knows he wants to score with one—or both—of her hot friends.  God, the man-whore’s arrogance really pisses her off!  But Bianca needs to escape from some personal drama, like her mom’s abandonment and her dad’s denial, and a steamy fling with Wesley seems like the perfect distraction.  Bianca makes it clear she’s only using Wesley, as if he cares.  He’ll sleep with anything that moves after all.  Unfortunately, the enemies-with-benefits plan totally backfires.

When her mom files for divorce and her father stumbles into a downward spiral of drinking and depression, Wesley proves to be a surprisingly good listener, and Bianca finds out that his family is pretty screwed up, too.  As sickening as it sounds, she has to admit that she and Wesley are a lot alike.  Soon she becomes jealous of the pretty girls he flirts with and his cocky grin begins to grow on her.  Suddenly Bianca realizes—with absolute horror—that she’s falling for the guy she thought she hated.

2) Sounds like a clever and fun story! What inspired you to write it?

The title started as a joke.  A friend of mine came to school one day complaining about a boy calling her best friend "the Duff" and when she told me what it meant, I was amazed.  I had no clue that word existed, but my first thought was "Oh, that's me.  I'm the Duff."  And every girl I knew felt the same way.  So, jokingly I told my friends, "I'm going to write a book called The Duff."

Really, after that, I got the characters in my head, not knowing they fit the title until way later.  I knew Wesley first, and then Bianca just appeared in the back of my mind, this cynical, sarcastic girl who rolled her eyes a lot.  Haha.  I didn't know where they belonged for a while.

Then I heard the song "I Can't Stay Away" by The Veronicas, and it all just clicked.  I had the plot and knew THE DUFF was my title.  Everything just came together from there.  I was officially inspired.
3.) It's amazing how sometimes a story just swoops down. What's your writing process like?

In a word - Unpredictable.

Sometimes, I plan.  I write a full synopsis then use that as an outline and have character sheets and everything.

Other times, I start with a line and just keep writing.  That's what happened with THE DUFF.  The first line (which is now the second line actually) came to me, and I just started writing everything Bianca said in my head.

Once I get a rough draft -- which I can usually do pretty quickly - I go insane editing it.  I love editing.  I love revising.  I love being critiqued and getting new ideas.  So really, the first draft is the hardest part for me.  The most exciting, but the hardest.  I never know how I'll start a new project, but once I've got that draft, I know how I'll edit.
4) Same here! Sounds like all your work was worth it. Can you tell us about your journey to getting a deal with Little Brown/Poppy?

Well, I should start by saying that I'm a very, very lucky girl.  I know many writers who are way more gifted than I am who haven't made it this far yet, and I realize everday how blessed I am.  So I feel like a great deal of luck went into this journey.

I wrote the first word of THE DUFF on January 6, 2009.  I finished in March and began querying at the start of April.  On May 12, I signed with my agent.  And by the end of that summer, the book had sold.  So, I guess it was a quick journey in some respects, though I feel I'm still on the journey, too.

But this never would have happened without people.  My train never would have left the station, you could say, without the great support from people on AbsoluteWrite.  They taught me EVERYTHING.  Seriously, I grew as a writer so, so much from talking to others and sharing work.  I had amazing beta readers who shaped the book in a lot of ways.  I had great allies who gave me the names of agents to query (I found my agent through a member of my critique group who had a nice list of agents they were either interested in or had queried), and they pretty much taught me everything about query letters.  So without all the help, I don't think I would be anywhere.

Again, I'm very lucky.
5) Talking with others and sharing work definitely helps. I think I know the answer to this question, but others would love to know, I bet. So, how do you like working with Joanna Stampfel-Volpe?

Oh, geez, I should be careful what I say in case she reads this...

Seriously, she has been amazingly perfect for me and my book.  She was the only agent to request the full manuscript, and since my only other request--a partial--had been rejected, I was sure nothing would come of it.  So when I got the email saying she wanted to "talk" to me, I knew what it must mean, and I flipped out.  I woke my mother up (I found out late at night) and I called my best friends.  And then, of course, I was nervous.  So, so nervous.

That nervousness went away, though, the second Joanna started talking.  It was so easy, and her enthusiasm for the book was overwhelming.  I could tell she loved it--maybe even more than I did--and that meant a lot.  That enthusiasm STILL means a lot.

Joanna has really been a godsend.  I cannot imagine another agent being more fitting for me or my writing.  Heck, even my mother (I was 17 when all of this happened, so my mother was involved) adores her.  Moms are inclined to be overly protective and worried of anyone else managing their babies' art, because that is the mom's job for so long.  And my mother was scared at first, but after speaking to Joanna on the phone for the first time, she just raved.  She still raves.

So, yeah.  I ramble way too much.  But Joanna is amazing.  I think EVERYONE agrees with that statement.
Yes! I definitely agree! Well, Kody, thank you so much for being a part of the interview today! I'm so excited to read THE DUFF when it comes out!
--Realm
_____
If you're an author, editor, agent, or illustrator and would like a five question interview and a drawing of your character (or of yourself), email me at rtlovejoy (at) yahoo (dot) com. Check out the FAQ page for more info.
Labels: author interview