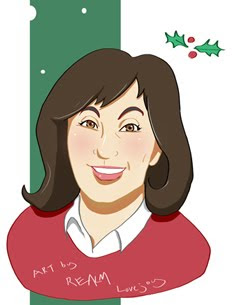 We've got the twentieth interviewee on The Blog today! Welcome author Gayle C. Krause, the first picture book author to be featured here! Christmas is just around the corner and Gayle wrote a Christmas story called ROCK STAR SANTA (from Scholastic) that's perfect for kids this holiday season. The illustration here is of Gayle herself!

1)   It's good to have you here, Gayle! What is ROCK STAR SANTA about?

It’s Christmas Eve. The tree is lit and children await Santa’s arrival, only they’re not tucked snuggly in their beds dreaming of sugarplums. They’re stomping and clapping at a Christmas rock concertwhere Santa is the “star.” Santa’s snow-white hair is in a ponytail and he’s ready to rock. The rowdy reindeer band includes Donner on electric bass, eerily resembling Keith Richard. Blitzen has a Paul Stanley-like star painted on his eye as he plays the drums, and you can’t help but notice the resemblance of Comet to Slash, as he shoots across the stage.

But Santa is “THE MAN.” He takes the stage, ready to sing and the lights suddenly go out. The child wakes to find himself in bed. He thinks he dreamt the awesome concert until Christmas morning when he finds a torn concert ticket in his jeans.  Confused, he stares at a silver snowflake, like the kind that covered the concert stage, flittering outside of his bedroom window. A note from Santa thanking the boy for being his biggest fan hangs on his window and green sequins from Santa’s vest glimmers on the boy’s floor. ROCK STAR SANTA is an original, modern day retelling of a Christmas classic, but what happens on this night before Christmas is rockin’.

ROCK STAR SANTA is available through the Scholastic Book Clubs (See Saw, Lucky, and the Winter Gift Catalog). The flyers are distributed in pre-school centers and the early elementary classrooms.

2) That's a unique take on Santa! What inspired you to write about the rock star Santa?

It was Christmas of 2006 and I had been listening to Trans Siberian Orchestra. I’d seen them in a Christmas concert the year before and their rock influence on the Christmas carols must have made an impression on my imagination.

3) The art looks great for ROCK STAR SANTA. What was it like working with an illustrator for the picture book?

Will Terry is a phenomenal illustrator. He has illustrated about twenty children’s books. When I wrote the rhyming manuscript I had no gender assigned for the main character or reindeer band. Will’s artistic talent brought them to life. He was responsible for the subtle references to known rock stars. Though I’ve never met him in person, we communicated through email. An illustrated picture book is a 50-50 proposition. The author must make sure his or her words have strong illustrative possibilities and the illustrator takes those words and designs the characters from them.

4) How did working as a teacher influence you as a writer?

I think being a teacher has given me a distinct advantage in writing for children. I taught in a technical education center where I guided young men and women who aspired to become teachers. I directed them in a laboratory Pre-K and they obtained college credit for their work in my class. Those students were my best critics. The juniors and seniors read my YA novels and the reaction I got from them helped me hone my craft to meet the needs of today’s teen readers. They also performed my picture books through creative dramatics and puppet presentations with the pre-schoolers, which allowed me to see which stories interested the children the most.

5) What do you love most about Christmas?

It would be the smells of the season.

·      The balsam tree that sends off a fragrance when the lights are on.

·       The molasses crinkle cookies and spice breads baking in the oven.

·      The cinnamon candles burning on the mantle and dining room table.

Gayle--I think you perfectly summed up the best part of Christmas! Thank you so much for joining us today!

If you'd like to get ROCK STAR SANTA as a Christmas present, you can order it through Scholastics Book Club.