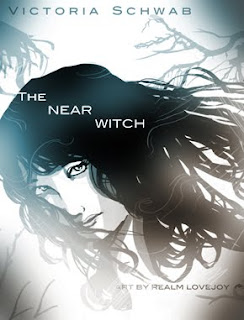 I've been talking with YA author Victoria Schwab for a couple of years, anticipating the releasing of her book THE NEAR WITCH coming from Disney-Hyperion. Finally, there's a release date! 08/02/11! I've always been intrigued by Victoria's artful writing style and am excited to have her featured here today. Kindly, Victoria is answering not five, but six questions today!
For the illustration, I drew the main character, Lexi. She is described to have wild hair, like tree barks -- "Her hair is never smooth, and tendrils escape as soon as they can." Combined with the description of the book, I had a picture in my mind for Lexi. Overall, I wanted it to look haunting and misty.
1) Thank you for joining us today, Victoria. What is THE NEAR WITCH about?
There’s an old ghost story in the town of Near. It tells of a witch that lived on the edge of the village, and gobbled up all the darkness, and sang the hills to sleep, and loved the children almost as much as the garden she kept beside her house.

Sixteen-year-old Lexi Harris, the daughter of a tracker, has heard the stories her entire life, first from her father, and then from old Magda and Marta, who might be witches themselves. Everyone loves to tell the story, but everyone knows a different ending. Some say that the Near Witch blew away on a gust of wind. Others tell of darker things. Of murders and curses and buried bones.

To Lexi, they’ve always been stories, nothing more. But when a strange and silent boy walks into the village of Near, and then the wind begins to lure children from their beds at night, she starts to wonder if there’s any truth in them. Could the Near Witch be more than a ghost story?
2) I love the story description so much! What inspired you to write about THE NEAR WITCH?
I love words. I love the way they sound, and the ripples of sound they can make, so it's little surprise that my stories almost always start with a line. I wrote the sentence, "There are no strangers in the town of Near," and liked it, but had no idea what it meant. I tucked the line away in a file, and six months later, another line popped into my head, "The wind on the moors is a tricky thing." I immediately knew the two lines went together, and the whole book blossomed out from them.
3) What's your character design and story construction process?
For THE NEAR WITCH, it was messy. The setting came first (and this might be why people have called Near it's own character). Equipped with a setting, a line or two, and a short list of things I feel "fit" with the vibe/tone/world of the story, I went exploring. I would write a few sentences about the story idea, and then a scene, this case in the narrator's voice. I then wrote five or six scenes, and just looked at the ways those scenes fit together, and what they told me. The story and the characters and the voice all kind of emerge simultaneously. They climb over each other and grow off of each other. For this book, it was largely about discovery for me. I discovered the world and the characters and their story as I was writing. That said, I always have an idea of the absolutely essential scenes plot-wise. But everything else is exploring, then hacking and pruning and shaping. Messy.
Working on my next book, it hasn't been nearly AS messy, but it's by no means a straight line from none to done.
4) I like your method of just letting things grow. How do you like working with Holly Root?
I am enamored. She is sweet and terrifying and wonderful, hungry, and an incredible grounding force, and she helps me keep my head on. I've never felt so much like part of a team (Team Root FTW!) and an agent's only client at the same time. And to be honest, Editor Abby and Agent Holly together are like an awesome sandwich. Or maybe bookends. Either way, they keep me together. I couldn't be happier.
5) Can you tell us about your journey toward getting your book deal with Disney-Hyperion?
It was longer than it seems! The Near Witch wasn't my first project. My first book was a dark Middle Grade. While it was out on submission, about eight months into its submission actually, I needed a distraction, and started writing The Near Witch (while finishing my thesis and my college education) and for some reason the story just poured out. And I loved it. It went out on submission summer of '09 and just under two months later, I got the call!
6) Wow! And your journey has only begun...What's your next book about?
THE ARCHIVED, about a teenage girl who must return the restless, ghost-like Histories of the dead to their rightful place in a labyrinthine supernatural library known as the Archive; when more Histories begin to wake and escape, she must stop the doors between the worlds of the living and dead from breaking open, all without falling victim to a beguiling History who is more human - and more disarmingly attractive - than the others.
THE ARCHIVED also sounds super awesome. Victoria, thank you so much for joining us today!
Readers, THE NEAR WITCH can be pre-ordered here.
Cheers!
--Realm
_____
If you're an author, editor, agent, or illustrator and would like a five question interview and a drawing of your character (or of yourself), email me at rtlovejoy (at) yahoo (dot) com. Check out the FAQ page for more information!
Labels: author interview