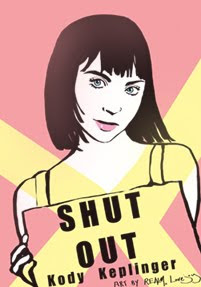 Hello, everyone. Kody Keplinger is back on The Blog today! Last time, she was interviewed for her debut book THE DUFF. (She was published at age eighteen--wow!) She is once again published by Poppy for her new book SHUT OUT. It will be out September 5th--that's next week!

For the featured illustration, I drew the main character of SHUT OUT. Her name is Lissa and Kody says, "she's a bit of a control freak - well, okay, more than a bit. She's quite neurotic, actually, and worries all the time. But she can also be fun and goofy when she's with people she trusts."

SHUT OUT is a modern re-imagining of the Greek comedy "Lysistrata," a play by Aristophanes. The play is about a group of women who go on a sex strike to end a pointless war. So in SHUT OUT a group of high school girls, led by Lissa Daniels, are sick of a rivalry between the football and soccer team. The girls decide to go on a strike - withholding all physical relations - from their boyfriends - until the rivlary ends. As the strike goes on, the girls grow closer and begin to discuss their views on sexuality, boys, and relationships. Ultimately, its a lot of fun with a little bit of romance.

2) What inspired you to write the story?

My freshman year of college I had to read "Lysistrata" for a class. I LOVED it so much! I couldn't help imagining what it would be like with modern, teenage girls. Obviously, some liberties had to be taken, but I tried to stay true to the themes.

3) What a cool idea! Are you a fan of any sports? Or did you have to learn about football and soccer?

I'm so not a sports girl. I try so hard to get into them, but its just never been my thing. So when I started writing this novel, I had to have some help. I understand enough about football to write the parts I had to, but not soccer. I've always thought soccer was cool, but I never really got it. Lucky for me, a friend of mine (as well as a fellow writer), Shelby Bach, took the time to explain soccer to me. Not sure how much of the explanation stuck, but enough to work in a few soccer details!

4) What makes the football and soccer team hate each other?

When I was coming up with the idea of a rivalry that these girls would have to end, I knew it needed to be a very pointless rivalry - one that just wasn't worth fighting. And I knew that it would need to be within one school so that these girls could logically team up. The idea behind the football and soccer teams fighting was basically that they share a season - both play in the Fall. Because the soccer team was only started ten years ago, the football team back then (when Lissa's brother was in school) lost some of their funding and started having to share the weight room and locker rooms. This started some tension that morphed into an all out battle, one that never died and heats up every fall, even ten years later. So its pointless, old, stupid, and utterly annoying to all the girlfriends of these boys.

5) How are the two boys, Randy and Cash, different from each other? How does Lissa feel about each boy?

Randy and Cash are polar opposites. While Randy is the kind of guy who acts now and thinks later, Cash is a little more careful about things. Randy can be sweet, for sure, but he can also be a little abrasive - he makes his feelings on things clear. Cash, on the other hand, is more sensitive to how people feel and keeps his thoughts to himself, to a fault at times because people can misunderstand him. The boys do share one thing in common - they are both gorgeous! As for Lissa, at the start of the book she is completely in love with Randy, just not completely comfortable around him (she's a bit of a control freak and its hard for her to relax around anyone). And while she is drawn to Cash and feels at ease around him, she also has an old grudge against him because of how he hurt her in the past. So she's conflicted, to say the least.

Thanks for telling us about your latest book, Kody! Sounds like you wrote another fun, upbeat teen story with plenty of romance and comedy! Readers, go check it out here.