Everyone is getting back into the swing of things after the Holidays. I've attended quite a few events since I've moved into the city and also because my resolution is to be open to more new experiences. I'll tell you about some of them.
Picasso 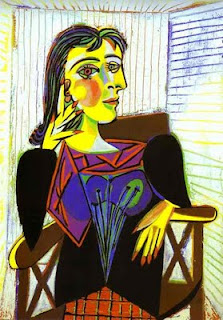 I went to the Picasso exhibition over at the Seattle Art Museum. I've never been a huge fan of really chaotic art, but am always interested to see how an artist developed his style. Ultimately, when an artist does what he wants, it produces the best results, and it seems that that is exactly what he did. Multiple perspectives on one canvas, abstract focus on one part of the face, incorporating the dimension and simplicity of African masks -- he worked on what he wanted to express, experimenting away from the norm.
Meghan Trainor 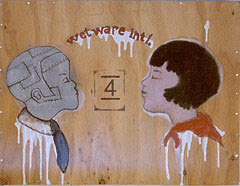 I went to this mechanical/organic artist Meghan Trainor's talk. She focuses on incorporating machines and humans into her artwork, having machines not take humans away from themselves, but close to themselves. She experiments with microchips, brain signals, using long metal claws to move and feel surface differently, a software that read brain signals to move a 3D object, and many more interesting projects. She is thinking about how a human adapts to different ways of moving and how technology could expire so fast -- and what happens when it's on you?
Lang Lang 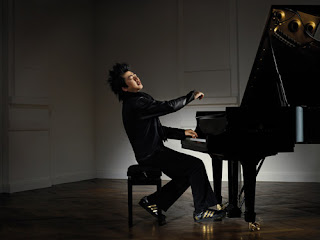 I saw pianist Lang Lang at the Seattle Symphony. This guy doesn't even look at the keyboard or read music as he plays. His fingers seem to glide over the keys at lightening speed and somehow, music magically streams out. He played Beethoven and Chopin among others. It was amazing...but I felt he hasn't unleashed his full potential. He could take piano to a whole nother dimension with his insane talent. I hope he takes off making his own music or totally breaking an already existing music into something super extraordinary. I got the impression the pieces he played was effortless to him. He could play it with his eyes closed -- for real.
Jim Woodring 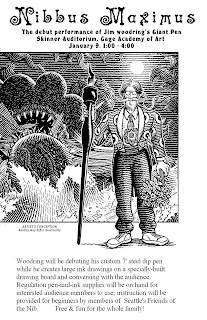 I attended Nibbus Maximus where graphic novelist Jim Woodring built a 7 foot fountain pen. He debuted his pen by showing a demo, drawing with the pen. It was surreal to see someone drawing with a pen that's taller than I am. His abstract, story telling art is interesting and worth checking out. 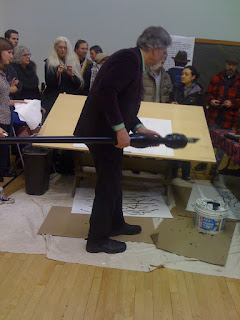 So, readers, that's about it so far! But the year has only begun. What are some interesting things you've done or seen this new year?
--Realm
Labels: news week