Recent Read - TELL ME A SECRET 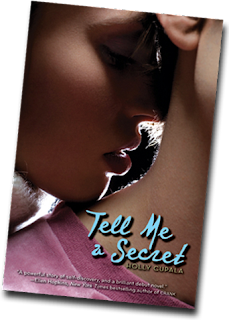 A few weeks ago, I finished reading TELL ME A SECRET by Holly Cupala.

This contemporary YA novel is set in Seattle and Miranda hangs out in Capitol Hill -- where I live! The novel has a realistic teen voice with a solid story. I enjoyed Holly's poetic and symbolic style of writing as well as the scenes she wove together to let the story unfold naturally. If you like author Justina Chen's work, you'll definitely like Holly's story. The story spirals around the death of main character Miranda's sister, Xanda. I could feel Miranda's frustration, loneliness, and emotions as she journeyed to find her freedom and truth after the death -- what happened, and what's her future? Miranda's mom has a strong character and I could easily imagine her, being over-protective, controlling. Miranda's connection to her baby seemed very real and well portrayed. The mom showed the shadow of Xanda's past, while the baby showed the light of Xanda's future. This work surely has a lot of Holly's hard work and heart in it.

Here is the blurb by Holly from the interview she did for me:

TELL ME A SECRET is the story of Miranda Mathison – seventeen, and on the cusp of everything she wants…art school as far from her family as she can get, a seductive friend with access to the secret world of her bad-girl sister (who died mysteriously five years before), and a dreamy boyfriend to take her to the ends of the earth – or at least to Boston, where they both want to go to school. The problem is, Miranda has a secret of her own that will shatter everything she hopes for: a positive pregnancy test.

It’s a little bit mystery, a little bit relationship story, a little bit family, and even a little of suspense. Almost everyone has a secret, and things aren’t always as they seem. At its core, it’s about forgiveness, identity, and finding a way into the future.

I hope you all get to check this book out and add it to your winter reading list!