Hello everyone! I hope you enjoyed the blog tour that ran this month and thank you for making CLAN rise to second place in Amazon's Young Adult Science Fiction best seller list for eBooks! Please note that CLAN will go back to it's regular pricing on the 26th--enjoy the discounted price while you can.

If you missed it, there's still a chance to enter the giveaway for a signed paperback and illustration.

Today Book Marks the Spot reviews CLAN! A quote from the review: "The other clones reaction to Twain's differences really made me think of some other prejudices that have come to pass in our world due to differences in appearance or culture." (read the rest here.)

I offered CLAN for free for two days last week and I have some more gifts for you!

Firstly, I am offering another donation. All royalties earned thus far in December plus this week until the 28th midnight will be donated to the Cancer Research Institute--which is a nonprofit organization.

In CLAN, genes are a huge theme and how each of us are born with certain genes we cannot control. We can hope that advancement in science and technology and medicine can help cure the consequences of genetic mutations. I am also making the donation in memory of my Grandmother, who I lost in 2009 to cancer. If you buy a copy of CLAN this week, please know your money is going toward the research for a cure.

Secondly, here is a CLAN snowflake that's actually in the book. Save it, print it, and use it as a stencil--BUT only try if you're super skilled with scissors or a blade. The small negative spaces are really tricky:

Excerpt from CLAN with this snowflake in it:


Buster reached for a book and began flipping through it with a curious expression. His elbow bumped some kind of ornament. It fell with a clunk. He picked it up. It was a glass orb with a miniature tree inside and white, small dots flying around in the water.
Buster shook it, causing the white things to swirl. “What’s this?”
“Hmm…” Twain narrowed his eyes as he searched his memory. “Oh, my sponsor told me once that on Earth, it snows. It’s like rain, only frozen.”
“No way.”
“Yeah. That must be a representation of ‘snow.’”
Buster inspected a white paper cutout that was next to the orb. “This?”
“That’s snow, too. It’s the ice crystal. My sponsor was fascinated with the idea that no two crystals were the same.” The paper’s shape looked like humans all around a globe, holding hands. Twain suspected that his sponsor had made it. In some ways he missed the little odd things his sponsor had done. It had always made him curious about a world that was bigger than theirs.
Wonder took over Buster’s face. “You think I can keep it?”
“Why not?” Twain shrugged.
Buster put the paper in his pocket.
“Why do you want to keep that crap?” Chad grumbled.

If you're up to making some sugar cookies from CLAN, try making 'em man-shaped: 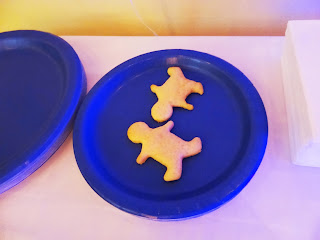 I made these for my CLAN book release party!


Twain took his plate of three homemade cookies in the shape of stick figures. Each cookie had its own face. He still couldn’t believe that his sponsor had tampered with the food, concocting baked goods that were against the law. Twain didn’t understand why his sponsor defied the norm—his action was not a good example. Twain left the room, wanting to be anywhere but with his sponsor at that moment.
Once in his room Twain leaned against the closed door. On his plate the cookie men smiled at him with their carved mouths. Twain had never seen his sponsor or any other Clan smile. He spiked the plate onto the ground. Taking in a shaky breath, he bit his lower lip, trying to compose himself, but this only re-opened the cut there. He tasted blood.
The cookies cracked under his heels… duplicate cutout men, broken into a million pieces.


You can also make a garland of paper men from the book to decorate for the holidays:


Twigg pointed at the Y-shape on his shirt: the Clan symbol. “I was named after this symbol. It doesn’t just represent the Y-chromosome—it’s a broken twig. You see, when cloning was first introduced on Earth, a man held up a twig and broke a piece of it off to show what cloning meant.” Twigg motioned to the tree sculpture behind him. “Even though the branch was segmented, it still belonged to the same source and was still the same wood it came from. Knowing this, I think that no matter what, we will always be Unified, even in difference.”
Twain’s eyes landed on the metal tree. He noticed something wrapped around it—it had been decorated with cutout paper men, holding hands.