Today I am launching the character portrait series from novel HENGE (Le Fay Series)! Every week I will reveal a character that I illustrated. Today I am introducing you to the main character of the Le Fay Series. 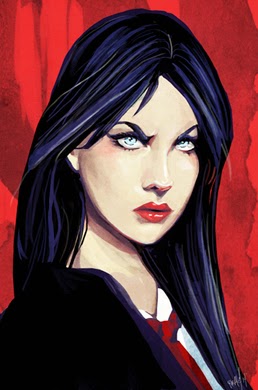 I'm particularly happy about this painting because it shows how I view her and why I was attracted to feature her as the heroine. There's something different and intense about her. I love that she's powerful and complicated but also that she's vulnerable, admits openly to her own thoughts, however dark, yet has the bravery to push through challenges. She was interesting enough for me to create a series so I feel blessed to have her as my Arthurian muse.

Here are some of my favorite quotes from Morgan:

"I have no distractions from my goal. My will is pure, driven by madness. 'Nothing is more powerful than madness,' my mother used to say."--Morgan le Fay, Henge (Le Fay Series)

"...But why try to justify my anger to myself? Hate is an emotion that needs no logic or reason. Hate exists, meaningless and indignant. I know this and still hate him."--Morgan le Fay (on Mordred), Henge (Le Fay Series)

"Grandfather insisted that my name be Morgan when I was born—he hoped I’d be a water user. He said that Morgan means, 'circling sea,' which reminded me of waves that go round and round—only widening, getting fiercer, never receding, and turning into a black hole."--Morgan le Fay, Henge (Le Fay Series)

"I have emotions that are terrible and coiled like snakes tangled into each other. I cannot count or identify them. I never know when one will poison me. And where did they come from in the first place?"--Morgan le Fay, Henge (Le Fay Series)

I hope you enjoyed meeting Morgan! Stay tuned for the next one...