As a part of the character portrait series today I am revealing Merlin! Merlin is the second most important character in the Le Fay Series and my second favorite character too. You'll see what role he plays exactly if you read Henge. Is he a friend? Enemy? Romantic interest? 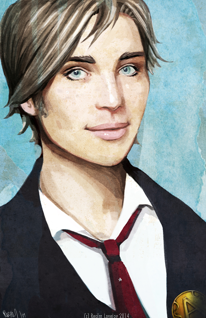 I'm pleased with how this came out because it's one of those paintings that gave me a lot of insight into how he appeared. He has a very kind and calm yet guarded look--the kind of face you can't quite read. This painting really helped me understand him more as character.

Morgan's description of Merlin when she meets him for the first time:

"As I walk backstage the young man who was staring at me beams with perfect teeth. Suddenly the temperature in my face rises, and it doesn’t help that I just got done working with fire. I wipe the sweat from my face with the back of my hand and study him. The bright light above shines through his long lashes and illuminates his ash-blond hair and blue eyes, which are the shade of a partially cloudy sky. A somber and wise blue. A smattering of faint freckles dots his nose, like raindrops. He even smells like rain."--Morgan le Fay, Henge (Le Fay Series)

She [Guinevere] smiles at me impishly. “Are you checking him out?”
“Him? You mean…”
I look back at Merlin, then at her. “No way!”
“He’s cute, isn’t he?”
“I guess he is, but he’s…”
Guinevere cranes closer. “What?”
“Nothing.”
“You can tell me,” she says.
“My father told me never to judge someone I don’t know.”
“Judging and gossiping are part of proper conversation.”
I lift a brow. “He’s too, uh… too pompous,” I say. “Pretentious.”
“I guess so,” Guinevere says. “Nobody is genuinely that perfect.”
“Exactly,” I exclaim.

I hope you enjoyed meeting Merlin!

And don't forget... Henge is 99 cents until Monday! Go really meet Merlin in the book and enjoy!