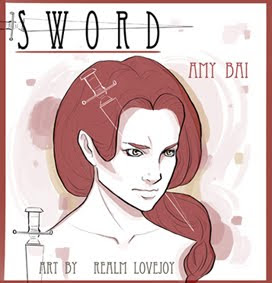 We have our tenth interviewee today! Amy Bai is the author of SWORD, a high fantasy novel that's currently out on submission. She is represented by Shana Cohen at Stuart Krichevsky. I had a great time getting to know Amy. She is super nice and productive! I can only think great things are in store for her.
The illustration here is of MC, Kyali Corwynall. She is a 20-year-old redhead with a modified claymore and a talent for offending people. Doesn't she look tough?! I enjoyed drawing her glowering expression.
1) What is your novel about?

Sword is a coming of age high fantasy about a girl pretty much at odds with everything, including and especially herself. It's set in a fictional kingdom called Lardan, one with a long history of magic and war, and a population so complacent they've forgotten that either one ever applied to them. They learn differently when history begins to repeat itself: there's an uprising, the kingdom is thrown into civil war, and the royal family, of which my main character Kyali is a satellite member, is murdered. Kyali, her brother, and the princess are forced into exile with a small army of refugees. Kyali was badly hurt during the uprising, and comes out of that a changed person; unfortunately for her she's now the only person with the training to command what is left of the army, and her friends need her.

Sword is her story, how she learns to deal with what happened to her without shutting out the people she loves, and with the responsibilities she has to shoulder now that the older generation is dead and the kingdom is overrun. It's about loyalty and love, fate and family and politics. It's also violent, occasionally sarcastic, and unabashedly sappy.
2) What inspired you to write the story?

I had a very sullen young woman with a battered old sword and no patience kicking my frontal lobe. As motivators go, it was a pretty good one.

--Ok, so that's a little dramatic, but really not too far from the truth (except the part about the frontal lobe, of course). Kyali Corwynall started out as a patchwork of some of my favorite characters from books like Robin McKinley's The Blue Sword and Patricia McKillip's Cygnet, going all the way back to Barbara Helen Berger's Gwinna, which I read when I was seven. My brain is like cosmic flypaper: the stuff I like (or hate) sticks, accumulates, eventually acquires a gravitational field, and before I know it light's bending around it and I'm up at 3 am mainlining coffee and my keyboard's broken. Sword was like that. One day I had scattered pieces, and the next I had a character with layers, flaws, goals, scars, and a complicated history. Stories always start that way for me, no matter how cool my premise may be (or how cool I may think it is, anyway) --my characters inspire and drive it, start to finish.

3) Since your novel is medieval-influenced, can you tell us a bit about your researching journey?

Wow. How I'd love to give you a list of planned, organized steps I took. It would make me feel so much smarter!

But no. I stumbled into the research for Sword much like I did the story itself. I think my research began the moment I realized I had no idea how heavy a sword really was, or how hard it might be to wear armor and, you know, walk at the same time. I remember thinking writing fantasy would be easy (yes, feel free to laugh at me). It didn't take long before I realized it was very, very obvious when I didn't know what I was talking about. So I went from looking up Irish baby names online to running to the library after work to find the Focloir Scoile or The Book of the Sword. I eventually learned to restrain myself, because research can be a wonderful excuse for not writing when you're stuck-- but overall, it was great fun.
4) What's your best revision tip?

Remember basic dramatic structure when you're reading your draft(s). It definitely doesn't always apply, and definitely shouldn't always apply, but I've found it can be a great lens: I can look at the whole story, each subplot and character arc, each chapter, and each scene with that structure in mind, and I'll always find something to tweak. Or mangle. Or outright kill.

...Revision is a slightly violent process for me.
5) You write very productively, having finished your second book already and tackling multiple projects. Do you have advice for authors on how to be productive?

This question makes me sound much more competent than I feel. I like it. :D

1.) Come up with a routine that fits into your life and stick to it. I get up 1-2 hours before work and I spend them at the keyboard come hell or high water. During these hours I will write something, even if I end up deleting it all later.

2.) Program your router to turn off at certain times. I wander in and out of this plan because I'm not as disciplined as I want to be, but I find if I have no internet access, I'm a lot more likely to actually get some work done.

3.) Invest in an espresso maker. Glorious, glorious things.
I second the advice about espresso! If it weren't for caffeine, I'd probably be living in a box right now. Thank you, Amy for your fabulous advice and telling us about SWORD!
--Realm
____
Enjoyed this interview? If you're an author, editor, agent, or illustrator and would like a five question interview and a drawing of your character (or of yourself), email me at rtlovejoy (at) yahoo (dot) com. Check out the FAQ page for more info.
Labels: author interview