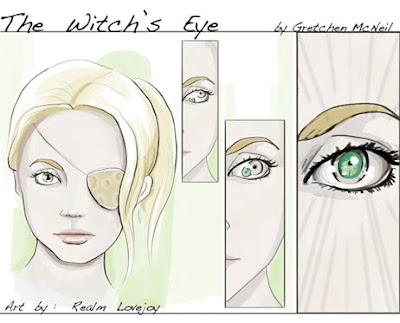 Today I am introducing you to an amazing author! Gretchen McNeil is not only an author, but she was an opera singer, a producer, and did some voice over work...and is a circus performer. I'm not done yet! She is represented by Ginger Clark! Her YA fantasy book THE WITCH'S EYE is currently on submission and I'll be damned if it doesn't sell immediately. Furthermore, Gretchen is really humorous and frank--reading her emails had me cracking up.
The illustration here is of the MC, Shay O'Muir. She is a sixteen-year-old tomboy raised in the Bronx by an Irish immigrant father. She's got an eye with a supernatural secret...You can see a hint of how it works in the illustration, but for more info--get the book when it comes out! Needless to say, I was excited to draw this.
1) What is THE WITCH'S EYE about?
THE WITCH'S EYE is about a one-eyed girl from the Bronx who ends up in her father's hometown in Ireland racing some not-so mythological creatures to an ancient scroll that could open the portal to the Otherworld and allow the banished races to wipe our planet clean of humanity.  Damn, it sounds heavy when I put it that way!
2) What inspired you to write the story and to set it in Ireland?
The story was born from a single image: a girl walking into a sleepy town on the Irish coast, at night, in the middle of a fierce storm.  I needed to figure out who she was, why she was there and what happened next.
I've always loved Ireland.  My family is strongly connected to our Irish relatives in County Clare and I've always been fascinated by the folklore, the mythological basis for THE WITCH'S EYE.  I also wanted to write about the places I know and love in Ireland, so I adored the opportunity to get several of them in the novel.
3) What's it like working with Ginger Clark?
Ginger is amazing.  And I'm not just saying that because she agreed to represent me.  First off, I love that she says what she means.  If she likes something, she'll tell you.  If she doesn't, she'll tell you.  When she says "I'll read this in the next two weeks and get back to you," dammit all if she doesn't read it in the next two weeks and get back to me.  She responds to emails within a day, always obliges with a pep talk when I'm whinging around hoping someone will tell me I'm pretty and she has a great sense of humor (which you can probably figure out from her Twitter.)  I consider myself blessed to have her as my agent and I hope we have a long and successful partnership.
4) Can you tell us about the researching process you went through for THE WITCH'S EYE?
I'm a big friggin geek.  Let's just get that out of the way up front.  I love to research.  My book shelves at home are literally overflowing with books on things that interest me: Irish mythology, the history of the Irish highwayman in popular song, WWII POW camps, commercial fishing in Alaska, fallen angels, demonic possession and the Catholic church, 18th century sailing ships, spy tactics in the court of Elizabeth I.  See?  Geek.  For THE WITCH'S EYE I read The Book of Invasions and Lady Gregory's and Lady Wilde's collections of Irish myths and legends, Eddie Lenihan's transcriptions of the old seanchai verbal tradition, a bio of Biddy Early, archeological surveys of megalithic sites in Ireland.
For me, I kind of need to throw all of this information into my brain - like one of those giant lotto ball tumblers - and scramble it up.  Eventually, something interesting will come out.  Hopefully.
5) What was it like transitioning from performing to writing? Did your background in performing influence your writing?
Oooo, interesting question.  For those of you wondering what the hell Realm is talking about, I'm a trained opera singer who now performs with a circus (Cirque Berzerk in Los Angeles) and I've done some voice over work as well (Mary on  G4's Code Monkeys).  I'd say that performing has been one of the most important factors in my writing.  I'd never written anything prior to 2007, but the seeds of storytelling were in place.  As a performer, opera or otherwise, your main concern is telling a story, conveying it to the audience in whatever your chosen medium.  Once I discovered I could translate that to the written word, I was off and running.
Thank you so much, Gretchen. When you're famous, remember me, okay?
--Realm
____
Enjoyed this interview? If you're an author, editor, agent, or illustrator and would like a five question interview and a drawing of your character (or of yourself), email me at rtlovejoy (at) yahoo (dot) com. Check out the FAQ page for more info.
Labels: author interview